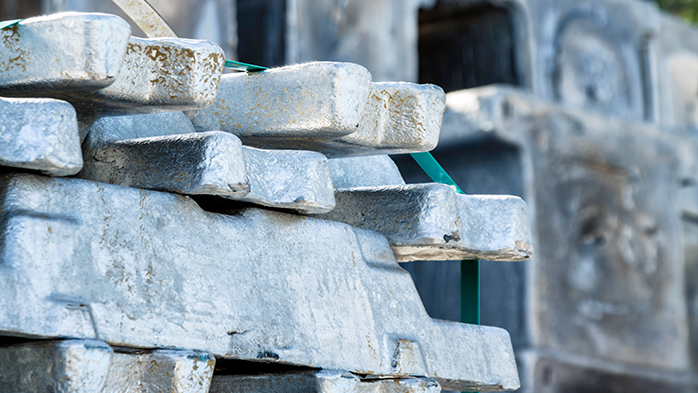 
The attractiveness of contango financing and the creation of queues by metal holders cancelling warrants and warehouse operators loading out metal at the LME minimum load out rate helped the US Midwest spot ingot premium rocket to a record high of 23.65 ¢/lb in December 2014.  However, several factors caused the tide to turn in 2015.  High Chinese fake semis exports put downward pressure on regional premiums.  In addition, the LME decided to implement new warehousing rules to reduce warehouse queues.  The attractiveness of contango financing also fell on the emergence of a dominant warrant holder that caused a market 'squeeze'.  The US Midwest spot ingot premium consequently dropped to 9 ¢/lb at the end of 2015.  CRU premium assessments show the US MW premium fell to 6.63 ¢/lb by the start of August 2016 (its lowest level since March 2011) on more muted trading during the seasonally quieter summer period.

However, low US ingot premiums are concealing a rapidly widening domestic primary market deficit.  While CRU expects US primary consumption to increase by 2.9% y-o-y to 5.5Mt in 2016, we forecast that US primary production will decrease sharply by 45% over the same period to 0.9Mt due to capacity closures implemented at Noranda Aluminum's 276,000tpy New Madrid smelter and Alcoa's 269,000tpy Warrick and 184,000tpy Wenatchee plants in the first quarter of the year.  We consequently expect the US primary market shortfall to widen from 3.7Mt in 2015 to 4.6Mt in 2016.

The US primary plant closures executed during the first quarter of the year have predominantly impacted the country's ingot market, as no closures of value added shapes production have occurred.  CRU expects these US market fundamental dynamics to cause domestic reported and unreported ingot stocks to fall over the next year, therefore resulting in a larger import requirement in H1 2017.  This means that US primary ingot imports will have to increase at an even faster rate than the impressive 42% y-o-y increase in the year to May 2016 (which eclipses the 2% y-o-y increase recorded during the same period in 2015) in order to compensate for the reduced supply from stocks and satisfy steadily increasing domestic demand.

But, where will the metal come from and what level of US Midwest ingot premium will be required in order to attract sufficient ingot imports from such regions into the USA next year?

US Midwest premium to rise to attract more imports from India and Russia…
Trade data shows that 77% of US primary aluminium ingot imports came from Canada in 2015.  Canadian primary ingot exports into the USA increased by 25% y-o-y in the year to May 2016.  Given our expectations that Canadian production will be flat after 2016 now that Rio Tinto's 420,000tpy Kitimat smelter is fully ramped-up, output from Canada will be insufficient to satisfy the USA's higher import requirements.  Even the redirection of Canadian exports away from other nations to the USA instead will not significantly help matters.  The US will have to seek ingot supplies from other regions in order to meet its needs.

CRU anticipates that one of the regions that could be in a position to make a larger dent into the US higher import requirement is India.  Trade data shows that US imports from India surged from just 20t in 2014 to 33,067t in 2015.  Annualised Indian imports into the USA in the period between January and May 2016 totalled 23,898t.

We expect production ramp-ups at Vedanta's 1.25Mtpy Jharsuguda 2 and 325,000tpy Korba 2 brownfield expansion projects to help Indian output increase by 864,000t between 2015 and 2017.  However, CRU expects developments such as the continued investment by India's government into its electrical sector will cause Indian primary consumption to increase by 280,394t over the same period.  Based on the assumption that Indian primary exports will increase at a rate of 30% y-o-y next year, (which equates to the compound annual growth rate for the country's primary exports between 2010 and 2015), there will be scope for a further increase in shipments from India to the USA.

We also predict that more material will need to come from the USA's third largest foreign source of primary ingot, Russia, and from European and Asian ingot warehouse stocks.

Low inventory levels and the need for higher ingot imports into the USA will support a higher US Midwest aluminium premium next year.  Much of the increase in imports into the USA in 2016 has been coming through New Orleans (NOLA).  Based on the assumption that the anticipated increase in imports next year will continue to come through New Orleans, CRU's analysis of freight and shipment costs indicates that inland and ocean freight costs from India and Russia are the lowest to the US Midwest. 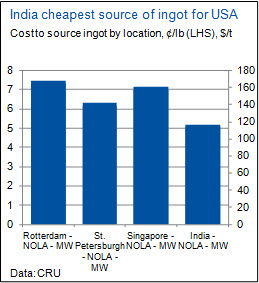 On the other end of the scale, we calculate that sourcing metal from warehouses in Rotterdam and Singapore would cost over 7¢/lb.  Given our expectations that an increased quantity of material will also need to come from warehouse stocks in order to fill the US ingot import requirement, we expect the US Midwest ingot premium will rise towards the 9¢/lb level in 2017.

…but how will it impact ingot premiums in other regions?
European aluminium ingot premiums have also dropped through 2016; partially due to narrow LME cash-to-three month forward spreads discouraging traders from holding onto metal.  As evidence, CRU premium assessments show that the Rotterdam duty-unpaid aluminium ingot premium has fallen significantly, from $115/t at the beginning of the year to $60/t in July 2016.  We expect the Rotterdam duty-unpaid ingot premium to remain broadly unchanged at an average level around the $65/t mark for the rest of the year, resulting in a considerable 59% y-o-y fall in the annual average premium to $74/t in 2016.

Given that Russia is the leading source of primary imports into Europe, CRU forecasts that the diversion of Russian material away from Europe towards the USA will cause the Rotterdam duty-unpaid ingot premium to increase modestly in 2017. 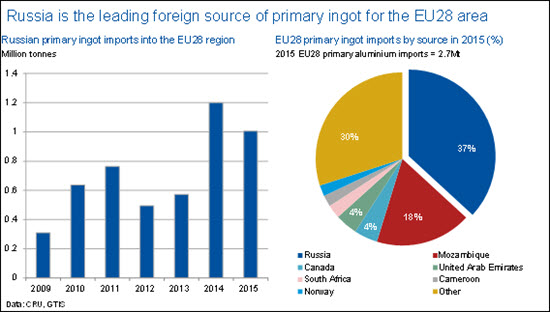 It is nonetheless possible that the European ingot premiums could be negatively influenced by European LME warehousing trends.  Fresh cancellations in Europe's main LME warehouses in Vlissingen have caused cancelled warrants as a percentage of total LME aluminium stocks at the warehouse to increase to 85% in early August. As a result, only 110,475t of material at Vlissingen are open.  This lack of open warrants could lead to a further tightening in the spreads which would force traders to sell metal into the market, thus putting downward pressure on European aluminium market premiums.