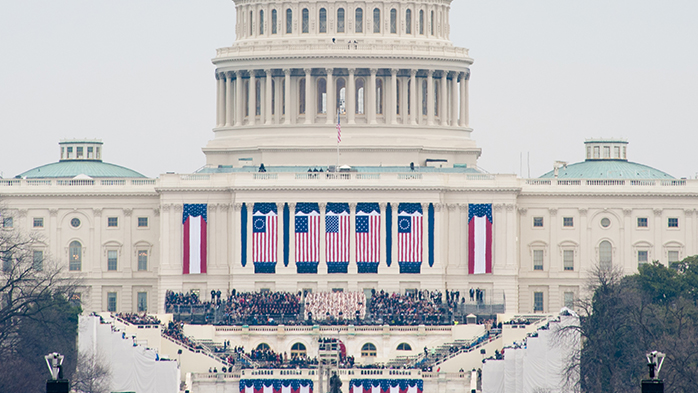 In the wake of the US Presidential election, we have seen a marked increase in the prices of a number of steel alloying materials, including nickel, molybdenum, cobalt and chrome.


While these markets have been buoyed by the election result, they have also been influenced by a number of external factors, making it difficult to assess the true scale of the "Trump Rally". Uncertainty also surrounds the exact nature of Trump's policies and how they will affect mid-term demand for each alloying metal.

President elect Trump will be inaugurated on January 20th 2017. Until then we expect communication by his transition team to be brief and lacking in detail. CRU anticipates continued volatility in western alloying metal markets as sentiment swings in response to new policy announcements. Global alloying metal demand will remain largely unchanged, but we do expect an overall positive effect on US demand in the near-term as a result of higher infrastructure investment and increasing support of US-based manufacturers. In addition to this, relaxed environmental policies could help facilitate expansion of domestic oil and gas, coal and mining industries - enhancing regional demand for tubular goods, special alloy tools and machine components.

CRU believes that stricter trade protection measures will help bolster regional stainless steel and special alloy production - increasing mill demand for alloying metals within the US. However, stringent trade policies and falling tax revenues could result in an economic downturn in the US by 2018 and stagnation thereafter. Consequently, CRU expects US stainless steel flat product demand growth to slow towards 2% per annum between 2018 and 2021 - bringing an end to the short-term punctuated increase in US metal demand growth.

The promises and the rhetoric
The exact nature of Trump's policies and the extent to which he will push them will remain an area of uncertainty well beyond his inauguration. However, stainless steel and special alloy producers with US-based operations, such as Outokumpu, AK Steel, ATI and North American Stainless, are expected to benefit from four policies that appear to be at the top of Trump's agenda:

- Protectionist trade policies: Domestic stainless steel and special alloy producers should benefit from the enforcement of more stringent import duties and anti-dumping laws on foreign material. Trump's idea of 45% duty on Chinese goods, seems highly unrealistic, but spells out his intentions. The Trump administration is also likely to push for a renewed NAFTA that is more beneficial to US-based manufacturers and their US-based suppliers. This could, however, result in reduced investment in US-based vehicle production.

- Increasing infrastructure spending: Trump has already expressed plans to embark on a $1 trillion campaign to improve the country's infrastructure, from water treatment plants to bridges. This should bolster demand for both stainless steel flat and longs products.

- US energy independence: Trump's focus on U.S. energy independence will have a positive long-term effect on the US oil and gas industry - helping clear OCTG stock levels and lifting regional demand for moly-bearing stainless steel grades. Regional consumption in this sector would have struggled under Clinton, who stated that she wanted to cut domestic oil consumption by a third within 10 years. Trump has already stated that he will support the development of the 1,180 mile long Keystone XL pipeline, which was rejected by the Obama administration in Q4 2015.

- Relaxing environmental laws: Removal of environmental "red-tape" will help support Trump's aim for energy independence and will also help prop up manufactures in several other end-use sectors. The election result may throw a lifeline to the US coal industry - helping bolster domestic demand for moly- and cobalt-bearing alloy components in turbine hot-sections and tubing. The move could also spur on domestic automotive production, mine development and heavy equipment manufacturing.

Alloying metals in the "Trump Rally"
The election result has had a clear positive effect on the equities of stainless steel and special alloy producers with US-based operations. In response, most alloying materials have also seen their prices increase in western markets. However, each price trend has varied significantly as a function of their differing regional and end-use consumption profiles and external forces that are affecting each market independently.

The nickel market saw the most prominent response to the election result, with daily LME cash prices increasing by 7.4% between November 7th and November 11th. The US ferromolybdenum (FeMo) price also registered a clear response, with the weekly average price increasing by 6.2% between November 3rd and November 17th. CRU was, however, already anticipating an increase in western FeMo prices in response to the strong rally in Chinese FeMo prices that occurred in late October.

Ferrochrome (FeCr) prices also increased significantly over the election period. Although CRU believes that this was primarily due to strengthening demand in China as well as tightening chrome ore availability on a global basis. Similarly, the increase in Cobalt prices was principally due to the tightening supply of refined units and aggressive demand growth for cobalt in Li-ion batteries in the electric vehicle (EV) sector.

Expectations for alloying metal demand
CRU believes that the election result will have a minimal effect on global demand for most alloying metals, but could help shift global consumption towards the US in the near-term. At present the US is only responsible for around 6.3% of the world's stainless steel and a slightly higher percentage of special alloy production. Therefore, the aforementioned policies should play a limited role in the global reconfiguration of each market. The announcement of new policies will continue to breed inconsistencies in the western metal markets, resulting in considerable near-term volatility. However, increasingly stringent trade policies and falling tax revenues could result in a fall in US GDP leading to a slowdown in demand towards the end of the decade.

CRU estimates that US stainless steel and special alloy producers only consume around 5.0% of the world's primary nickel and only 3.6% of the world's high carbon FeCr. Consequently we believe that there is little upside risk to these metals. Based on current regional supply and demand dynamics we believe that the consumption of these two metals will remain strongly centred on Asia.

US stainless steel and special alloy producers only consume around 7.9% of the world's moly. However, this market could see a sustained improvement in prices in the US if the OCTG overhang is eliminated. CRU was anticipating slow apparent demand growth for the oil and gas sector out to 2019, but the new policies could help bolster demand as early as next year. Global moly prices will, however, continue to be driven by supply developments: continued mine production curtailments in North America and China and slowing supply growth in Peru and Chile will be paramount to support oxide prices above $7.0/lb. 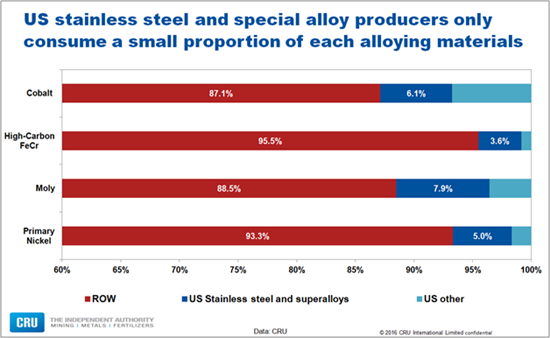 Western cobalt prices showed a weak response to the election result and are unlikely to see much upside in the US market as a function of the result. CRU estimates that the US currently consumes around 13% of the world's refined cobalt units, less than half of which are used in the high-speed steel, hard-facing and superalloy industries. While the election result may have a near-term positive effect on US cobalt demand in superalloys it could result in a longer term negative effect on regional cobalt consumption, especially if the removal of "green incentives" prohibits the future development of electric vehicle (EV) batteries on the continent.