In October, the EU Day-ahead monthly average wholesale electricity price decreased by 50% m/m to €159/MWh (Figure 1 RHS), tracking a fall in natural gas prices. Despite a substantial drop in power prices at the start of Q3, the wholesale market is still 55% higher compared to the 2021 average of €102/MWh. CRU foresees these high energy prices to persist. A rebound is expected this winter on the back of higher gas prices forecasted in the near term (Figure 1, RHS).

European electricity prices are highly correlated with natural gas prices. (Figure 1, RHS). The reason is because Europe follows the ‘merit order’ marginal pricing system where electricity prices are effectively set by the most expensive plant that is required to serve demand. Given its flexibility and cost, that is usually natural gas. Gas prices in Europe have fallen back sharply in October, as markets have been reassured by storage facilities reaching 94% capacity, and the possibility of a mild winter. However, it is still early in the peak demand season and further spikes in prices are likely.

However, gas prices are not the only factor that can impact power prices. Let’s take France for example. Since half of France’s 56 nuclear reactors were shut down for maintenance in August (Europe’s summer drought also prevented nuclear plants from functioning), France continues to struggle with lower-than-usual output from its large nuclear fleet. From January to October nuclear power generation decreased by 70 TWh - 20% of France’s total power generation (Figure 2, LHS). This deficit meant France has gone from being a net exporter of power to having to import power from Germany and Spain. The knock-on effect of this is that Spain has increased its generation of electricity from gas-fired plants by 43% year to date among other reasons. It has also pushed up wholesale electricity costs in France (Figure 1, LHS), which have been amongst the highest in Europe despite France using little gas for power generation.

High gas prices have led to significant reductions in gas use by industry, and to a lesser extent by households. But Europe’s power sector has actually used 1% more gas in 2022 than in 2021. This reflects the deficit in nuclear power output mentioned above, as well as lower output from hydro due to the drought hitting Europe this summer.

Output from renewables did increase significantly – by 12% year to date. We expect this trend to continue, and as French nuclear reactors come back online, gas usage for power generation should fall next year. 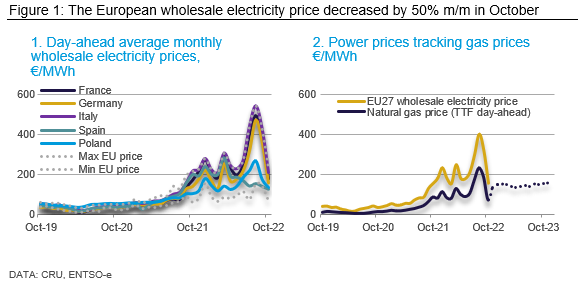 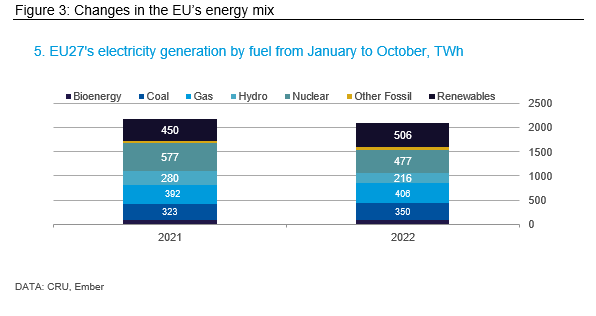 If you are keen to hear more about our views on the housing market and global economy, please refer to Global Economic Outlook and/or get in touch with us.