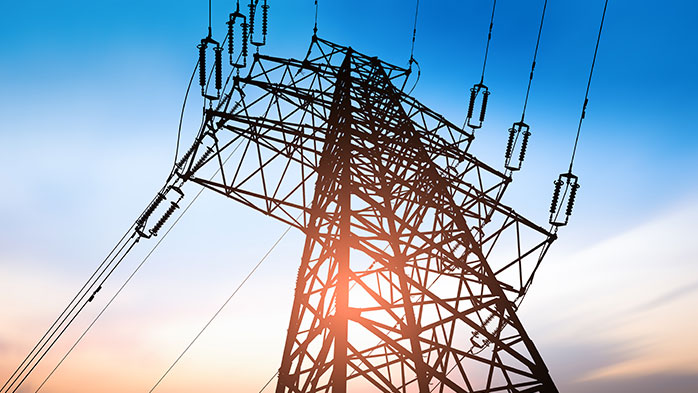 Efforts to reshore critical supply chains and secure access to strategic materials have become a top political issue for many countries, and trade barriers are a common tool used by governments to help protect local producers of strategic materials.


However, trade policy enforcements sometimes lead to market distortions in other parts of the supply chain, as industry participants with different incentives re-configure their procurement strategies to accommodate a changing legislative environment.

This Insight presents a case study on how the US transformer market has responded to trade actions targeting a niche steel product known as ‘grain-oriented electrical steel’ (GOES) in recent years, and how these industry responses have affected market balances for value-added products downstream of GOES sheet.

Earlier in May of this year, the United States Department of Commerce launched a probe to determine whether imports of products used in the US bulk power system were shipped in quantities or circumstances to threaten national security. The investigation was initiated under Section 232 of the Trade Expansion Act, the same piece of legislation used two years ago to bring 25% tariffs on steel mill imports from most countries.

The probe is centered on products known as laminations and stacked/wound cores, which are components of power or distribution transformers. Transformers are an integral component of the power grid, since they serve as a critical link or bridge between the three main stages of electricity delivery from producer to consumer: power generation, transmission, and distribution. Given the vital importance of electric power grids to matters of economic development and national security, efforts to safeguard the power grid and its raw materials supply chain have become paramount. 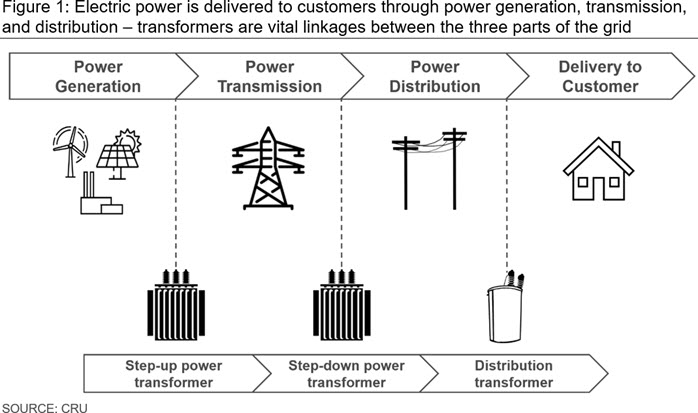 Transformers are a critical component of the power grid, subjecting its supply chain to policy intervention
The supply chain for transformer components is highly globalised, and in certain regions, highly consolidated among a small number of multinational conglomerates. Almost all transformer designs rely on a niche steel grade known as grain-oriented electrical steel (GOES). While less than a half million metric tonnes of GOES sheet is consumed within the US in a typical year, GOES is a highly technically-advanced product that is difficult to manufacture – there are only a few dozen producers worldwide who can produce some version of it, and less than a handful of suppliers capable of producing the latest generation of domain-refined grades suitable for use in energy-efficient transformers. In fact, the entirety of US GOES production is currently concentrated in the hands of a single supplier.

Given the critical role of the electric power grid to matters of economic growth and national security – GOES is considered a strategic material, and efforts to maintain a stable and diversified installed base of domestic production capacity is a key driver of regulatory intervention. As a result, GOES sheet has been subject to several trade measures in recent years, ranging from targeted antidumping investigations focused solely on GOES sheet from a shortlist of select producers or countries, to the much broader Section 232 enforcements on steel, which represent blanket enforcements on a variety of metal products from all countries, with few exceptions.

These trade actions are usually not self-initiated, but rather announced in response to a petition from domestic producers. Therefore, trade action announcements are often the product of a push-pull dynamic between government actors, incumbent domestic suppliers, importers, distributors, and end-users of a product. When trade restrictions are enacted, however, they can create inadvertent, yet significant ripples across the overall supply chain for any given industry – both upstream and downstream – as market participants adapt their procurement or sales operations in line with a changing legislative environment. 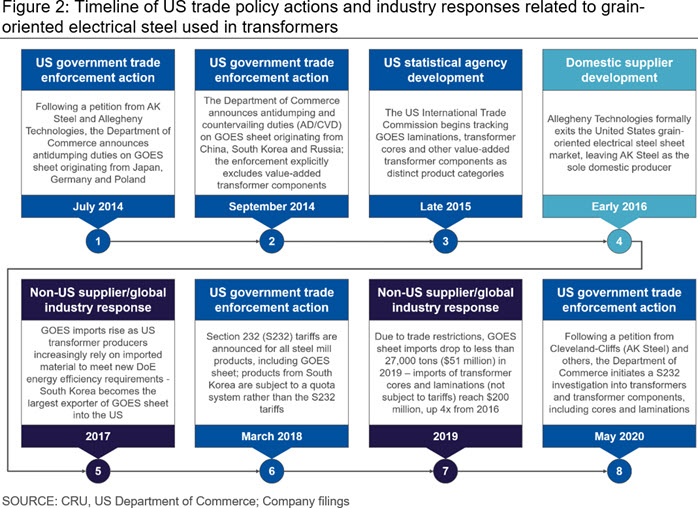 Trade barriers may prompt further interventions to remedy market distortions created by earlier trade actions
Following the original AD/CVD enforcements on grain-oriented sheet from major global producers, certain US transformer manufacturers responded by shifting transformer core production capacity to Canada or Mexico. As a result, GOES sheet imports into Canada and Mexico have surged from China, Japan, and Russia, all of which are subject to the initial AD/CVD investigations in 2014 and Section 232 enforcements more recently in 2018. In turn, shipments of GOES-containing laminations and cores from Canada and Mexico into the US have grown at an astounding compound annual growth rate (CAGR) of 46% and 80% from 2016 to 2019, respectively.

While some portion of this GOES import volume is surely used for domestic Canadian or Mexican transformer production needs, over 95% of laminations and cores destined for export from both Canada and Mexico are ultimately sold to the US. In effect, a significant share of GOES sheet that would have otherwise been ‘consumed’ in the United States is instead diverted into Canada and Mexico where value-added conversion into cores and laminations occurs. In turn, these GOES-containing transformer components are then shipped into the US under trade codes that are not currently subject to import controls. 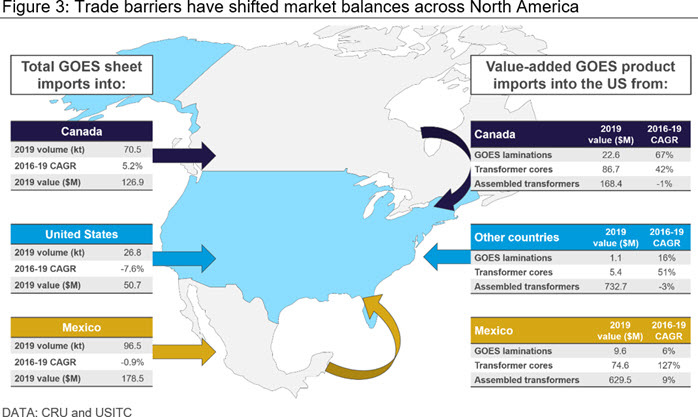 An uncharacteristic jump in GOES import volume occurred from late 2017 to early 2018 as many domestic consumers of GOES ‘frontloaded’ inventory right before the S232 trade enforcements went into effect. Despite this short-term boost, GOES import volumes have sunk sharply since the third quarter of 2019, reaching a record-low of only 5 kt during the first months of 2020 (valued at $9 million), compared to 12 kt during the first four months of 2019. While Covid-19 related economic disruptions may have played a role in this sharp year-to-date drop in GOES imports, CRU will note that imports of laminations and transformer cores have continued to rise steadily through the first four months of 2020, implying a more enduring, structural shift in how the US market procures subject-to-tariff materials.

Accordingly, trade actions focused on imported GOES sheet have not necessarily helped boost demand for GOES marketed by domestic producers. In reality, transformer manufacturers have re-aligned their global supply chains to sidestep these restrictions and sustain their businesses, while the middle portion of the supply chain – domestic laminators and other intermediary processors of GOES sheet – has encountered a shrinking addressable market. 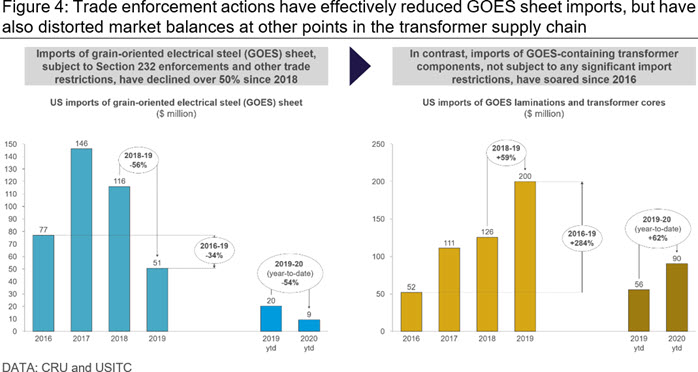 These inadvertent market shifts have ultimately driven the push for the most recent round in trade enforcement announcements – centered on whether the administration should extend the scope of S232 tariffs further downstream into value-added transformer components.

Although these new S232 investigations on transformer components were announced two month ago, the Department of Commerce has 270 days to conduct its investigation before presenting its key findings to the White House. It remains to be seen what the ultimate outcome of this investigation will be, but CRU Consulting follows these markets closely and continually tracks how global trade flows for GOES sheet and other metal products shift due to regulatory or trade barriers.

Having a deep understanding of current trade barriers and how the legislative environment may evolve in the future is key to building debottlenecked supply chains, identifying potential new business opportunities quickly, and maintaining resilient procurement strategies. Beyond its experience in assessing trade policy impacts, CRU Consulting has also developed a scenario-based framework to evaluate how increased pressure on local power grids – driven by factors like clustered xEV charging or integration of intermittent energy sources (renewables) – impact raw material requirements for GOES, aluminum, copper and other energy-related commodities.

Whether the situation calls for addressing a short-term disruption in energy-related supply chains or adapting business strategies to structural shifts in power generation and use, CRU has the resources and subject matter experts to help. For a deeper discussion on how CRU can help you navigate an evolving regulatory or legislative environment, contact us via the button below.