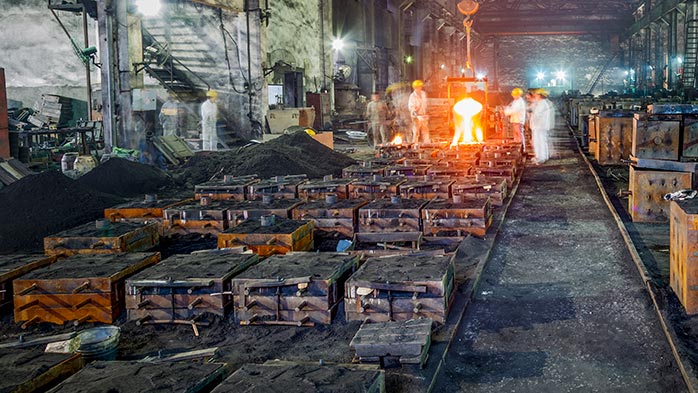 The US Federal Government continues to take unprecedentedly severe steps to protect its domestic economy in the global trade arena.


Metallurgical coke has been dragged into the escalating situation by way of both a direct tariff, and consequentially, because of tariffs placed on steel. This Insight explores the reasons why the initial and direct impact on metallurgical coke markets will be minimal, and why countries such as Canada would be ill-advised to introduce retaliatory tariffs on coke.

What started in 2017 as a two-pronged investigation under the guise of protecting US’s national security and trade performance has escalated into a fully-fledged global trade war. The original jurisdiction of 232 was the application of tariffs on finished steel and aluminium imports into the USA from numerous countries, including neighbours Canada and Mexico. Section 301 was focused on China, with the USA wanting to end what they deemed to be abusive trading practices with regards to their intellectual property and innovation. However, a back and forth of retaliatory measures has seen duties being recently expanded by the USA to target a wider range of Chinese goods from not only ballpoint pens to live eels, but also to the slightly more topical trade of metallurgical coke.

How section 232 has impacted coke markets
CRU holds the view that steel production in the USA will increase as a result of the 25% tariffs imposed on steel imports under Section 232. This includes the restarting of the two blast furnaces (BFs) at the US Steel Granite City site, which have a combined capacity of 2.2 Mt and were idled in 2015 after global Hot-rolled coil (HRC) prices plummeted to levels below production cost. US Steel also shutdown two coke batteries at Granite City at the time the BFs were closed. Built in the early-1980s, the batteries had a combined capacity of 0.5 Mt/y and exclusively supplied the Granite City BFs. These closures are seen as permanent due to the complexities surrounding the reopening of shut coke ovens. As a result, US Steel will need to source coke from either the domestic or global markets to satisfy their newly increased demand. Considering that, in 2017, the net exports of met. coke for the USA totalled ~1.1 Mt, and domestic producers have been operating below full capacity, there should be ample domestic supply to satisfy the greater requirements associated with the Granite City BFs. This will likely be from either the existing supply agreement from Suncoke’s Gateway coke operations, or from any excess capacity at US Steel’s own coke ovens at Clairton. 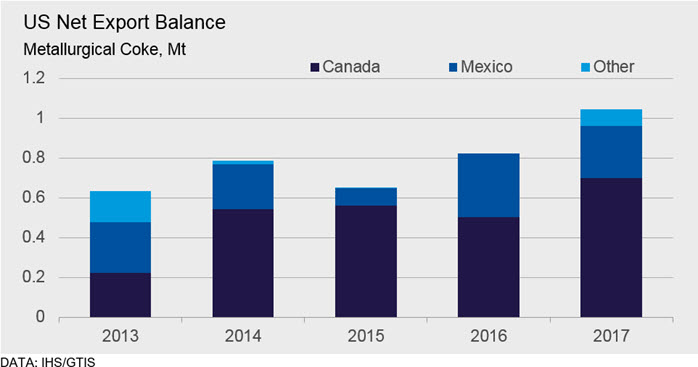 As for the ~1.1 Mt net exports of met. coke from the USA in 2017, ~0.7 Mt went to Canada and ~0.3 Mt to Mexico, with the Section 232 measures not expected to change this.  It is in the interests of US Steel, and seemingly within their capabilities, to meet their own increased coke requirements and we expect overall US exports to be maintained.  Assuming this to be the case, then none of the USA, Canada or Mexico will need to turn to the seaborne market to source coke due to the increased US steel production from Section 232.  As such, met. coke prices are not expected to change as a direct and initial result of Section 232.  This is very different from the impact seen in the steel market.  The USA needs to import steel, therefore, the tariffs have led directly to an increase in steel prices as import costs lift.  As a result, previously uneconomical steel production at sites such as Granite City once again becomes viable, but this is only likely to be the case whilst tariffs remain in place. Once restarted and production is fully ramped up, CRU’s view is that Granite City will be US Steel’s highest cost facility.  Below is CRU’s estimation of where Granite City will lie on the HRC production cost curve once ramped up in 2019, assuming coke is sourced domestically from the USA.  If this assumption holds true, US domestic coke prices would be likely to lift.  This would increase cost competitiveness of integrated steel producers relative to those purchasing third-party met. coke, as their input costs would be shielded from open market price pressures. 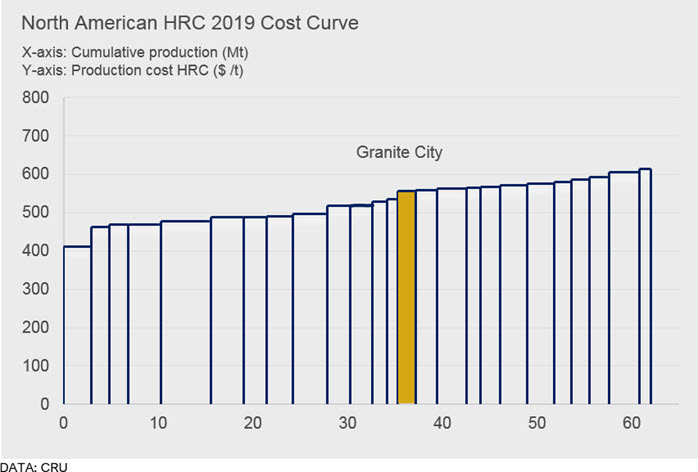 Why section 301 isn’t currently affecting coke trade
The inclusion of met. coke by the USA in its latest retaliatory measures against China is an intriguing development. It is the first time coke has been explicitly included as a direct trade measure throughout the unfolding saga, added as a suite of $200 bn worth of Chinese exports to receive a 10% tariff. Previously, the effect on coke trade and markets was limited to the fallout from Section 232, of which CRU expects there to be minimal impact as outlined above. A tariff will only impact trade flows on a product if that product is already traded. In the case of coke, of the ~8 Mt of Chinese coke exports in 2017, just over 300 t went to the USA, less than the amount sent to Syria. Essentially, the USA and China do not trade coke. As reported in the latest edition of CRU’s Steelmaking Raw Materials Monitor, China is in the process of removing high-polluting and high-cost coke capacity from its oversupplied market. As such, the tariff appears merely a charade of an aggressive step by the USA towards China.

Canada’s retaliatory conundrum
Now let’s imagine if the situation was reversed. Could those who purchase coke from the USA impose a tariff as a retaliatory measure to protect their domestic industry? Yes, but it would not be wise for a country to do this without the ability to produce enough coke to satisfy their own requirements. For this reason, Canada is an example of a country that is unlikely to impose coke tariffs on the USA. Canada did retaliate against the Section 232 measures with equal and opposite duties on steel and aluminium, before expanding the scope of products to include others such as pizza and tablecloths. However, coke was not a new addition. CRU forecasts 2018 coke production in Canada to be significantly lower than their requirements, with imports making up the shortfall. Of these imports, Canada sources ~94% of all imported coke from the USA, with Colombia providing the remaining ~6%. If Canada were to impose a tariff, it would increase the price Canadian steel producers would pay to import US coke. For companies with integrated steel production supply chains spread across both nations such as ArcelorMittal and US Steel, this would raise their production costs, even though the coke supply is captive within their own business. They could turn to the seaborne market, however this additional demand would be expected to push up prices. This would place Canadian mills at a freight disadvantage as costs from Colombia, and indeed anywhere else in the world, would be significantly higher than when coming from the USA. These higher costs could threaten the viability of Canadian steelmaking, having grave political and economic consequences. Thousands of jobs could be potentially put at risk, providing a big enough disincentive for Canadian authorities to impose tariffs on coke. The lesson here is that it is possible for duties to be imposed on the trade of metallurgical coke, but a net importer such as Canada does not realistically have such a weapon in its arsenal.

Unpredictable trade policies will determine outlook
During President Trump’s visit to US Steel’s Granite City on July 26, he said it was an honour “to see an old, big monster plant like this reopening”. This was only made possible due to the tariffs imposed under Section 232, with US production of steel heavily dependent on any further policy developments. As it stands for met. coke, increased domestic production from within the USA will provide the necessary requirements to service what “feels like a renaissance for US Steel” according to the company’s president and CEO David Burritt. No initial or direct impact on the seaborne met. coke market is expected as the US has capacity to maintain exports to their main customers in Canada and Mexico, making retaliatory measures from Canada on US exports of met. coke unlikely. However, although having no impact, the 10% tariffs applied by the US on the import of Chinese coke show that recent global trade policies have been evolving in a quick and unpredictable manner and need to be closely monitored by players in the global met. coke market.