How foreign exchange movements have affected the chrome market

Covid-19 is having a profound impact on the mining sector, financial markets, and the global economy. 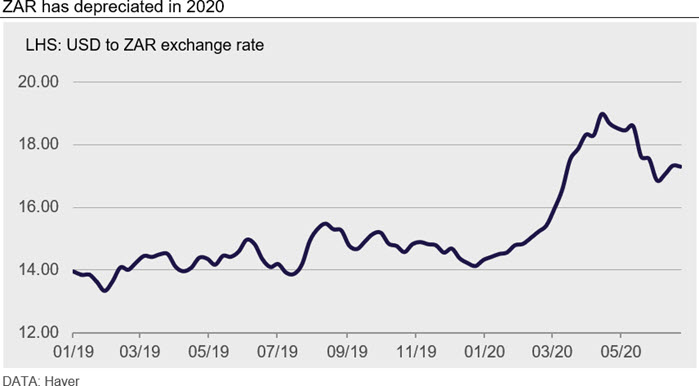 South Africa is the main source of chrome ore for Chinese FeCr smelters, with around 1.0-1.5 Mt of ore exported every month. In 2019, South Africa supplied 12.5 Mt of chrome ore to China or 80% of all Chinese chrome ore imports. Chinese smelters have gradually ramped up utilisation rates over the last three months, boosting ore demand. Chinese smelters have ramped up as Covid-19 infection rates were brought under control and because of increasing stainless steel production rates, up 5% m/m and 22% q/q. 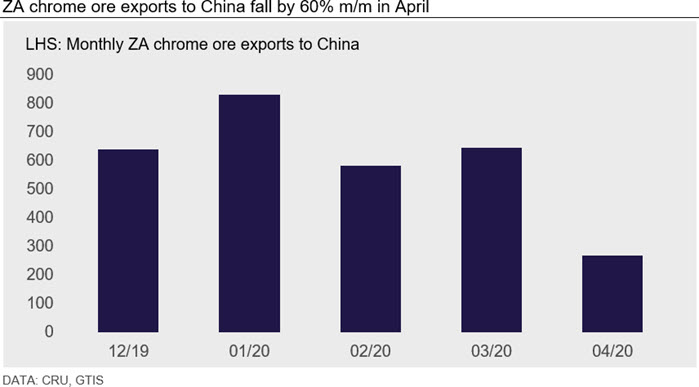 Yet, the spread of Covid-19 has hit other regions hard. Lockdown measures in key chrome ore producing regions has squeezed supply out of the market. We estimate around 2-3 Mt of chrome ore production has been lost this year due to lockdown measures being enacted in South Africa alone. This tightness can be seen in April’s total of chrome ore exports to China from South Africa, which were 265,878 t, or a 60% m/m fall. This is the lowest monthly total seen since December 2011. The South African government previously announced that chrome mine utilization rates were permitted to return to 50% in May and 100% in June, but chrome mine ramp-ups have been slow due to the implementation of new safety measures 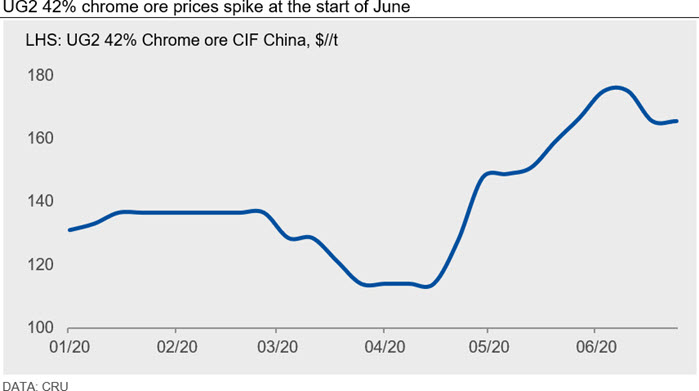 In Q2 chrome ore prices spiked, increasing from $114/t CIF China in mid-April, to $175/t CIF China on 12 June. This was due to concerns about future availability of supply. However, we are starting to see chrome ore prices decline, as supply returns and because of weakening demand outside of China. Yet, the depreciation of the South African rand against the US continues to support profitability for South African chrome ore miners. The rand averaged 17.72 against the US$ in Q2, compared to 14.36 in Q2 2019. This has provided an incentive for miners to return to higher operating levels, as many are looking to capitalise on higher prices and the favourable FX movements.

The impact of a weaker Rand…
The rand depreciated against the US dollar by 16% q/q in Q2 2020. The US dollar has been strengthened by its safe-haven status at this time of intense economic pressure. The strength of the dollar is a result of pandemic-related uncertainty, which has given rise to a ‘risk-off sentiment’, in turn leading investors to move to hold safe assets, such as the dollar or gold. The opposite is true for the South African rand.

The drop in the rand to multi-year lows against the dollar, is benefiting chrome ore producers as they benefit from cheaper production costs (except for energy) while taking higher income from sales in dollars. A weaker rand is essentially supporting margins for producers. 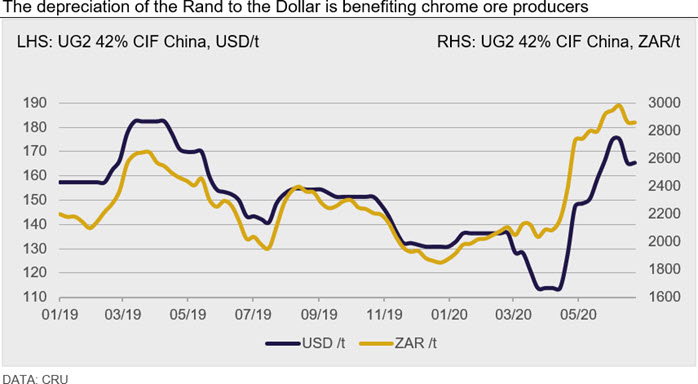 This has had an impact on prices, which have dropped back recently, as improved profitability has provided a greater incentive for miners to ramp up, helping to abate some supply side fears. Ore prices have also been hit by the softening demand outside of China. However, even though prices slipped to $165 /t CIF China, at the current dollar to rand exchange rate of 17.29, producers are still making far better margins compared to Q1 2020. Indeed, ore prices in ZAR terms are higher than at any point in 2019. The depreciating rand also helped support sales prices in March 2020, where UG2 42% prices were at record lows of $114/t CIF China, with the dollar against the rand being close to 19.00 then.

…versus buy side profitability
From a buy side perspective, Chinese buyers do follow the movements in dollar to rand and the effect it has on chrome ore producers’ margins. Chinese FeCr smelters right now are facing low profit margins, or in many cases, losses, due to higher costs. The depreciation in the rand is forcing many buyers to push back on chrome ore prices in dollar terms, citing the margins that chrome ore producers are obtaining in rand terms compared to their own low smelting profitability.

Even with FeCr tender prices increasing to RMB500/t to RMB6,200/t, DAP in June, the rise in met coke prices by 23% m/m in June, alongside a 40% m/m increase for UG2 42% chrome ore prices in early June (from $114/t CIF China to $170/t CIF China) means that only very marginal profits can be achieved at even China’s most efficient smelters in Inner Mongolia. We calculate that no Southern Chinese smelters are currently profitable. Chrome ore is the highest input cost for Chinese smelters. 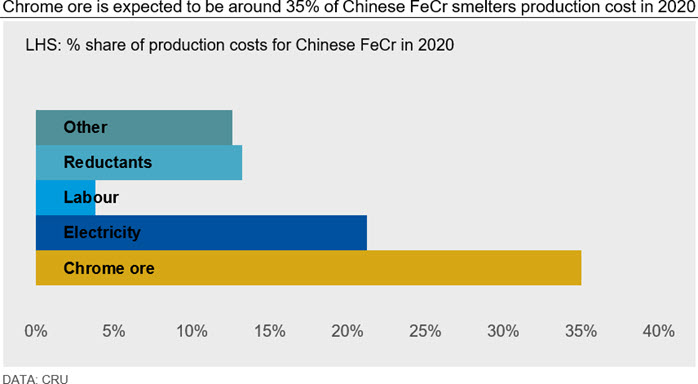 Profits at Chinese smelters are low, even though there is a strong increase in FeCr production, a 15% m/m increase in June because of rising stainless production. Many Chinese smelters are opting instead to purchase domestically at port or switch production. Currently there is around 3.5 Mt of chrome ore at port, enough to supply the domestic market for 13 weeks, in turn this is putting pressure on dollar equivalent chrome ore prices as even with a reduction in price, many chrome miners will continue to make solid margins due to the weakness of the rand. 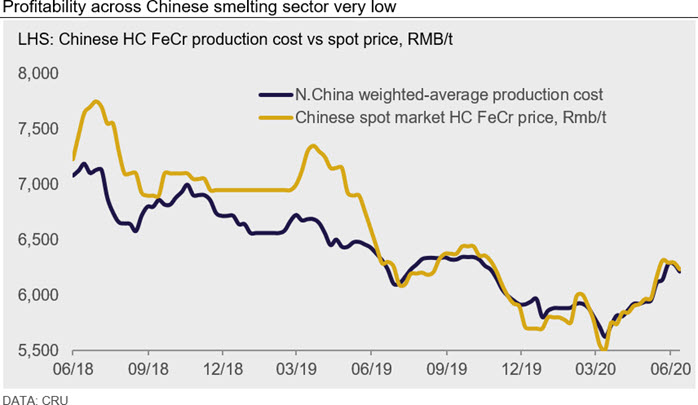 Exchange rate volatility to shape profit margins
Despite the recent price gains in chrome ore, major shifts in exchange rates remains a risk, both to the up and downside, to the bottom line of chrome miners. The weak rand has provided a boost to profitability, for now. However, those gains could evaporate on improvements in the South African economy or because of a wider dollar weakening. Yet, on balance, we think some further weakening of the rand to the dollar in Q3 is more probable due to the challenging economic environment in South Africa. This could support margins for chrome ore producers at a time when the very poor margins in the Chinese smelting sector are likely to force the dollar price equivalent of chrome ore lower. We think that some buyside pressure will tell, as stocks are high and there remains the potential for Chinese smelters to change their product mix away from FeCr.

CRU estimate the Covid-19-stricken global economic environment will lead to further volatility in exchange rates for both producers and consumers of chrome ore, and the swings in the rand to the dollar will fuel profit margins for both alike.