Impact of the Wuhan coronavirus on the steel industry 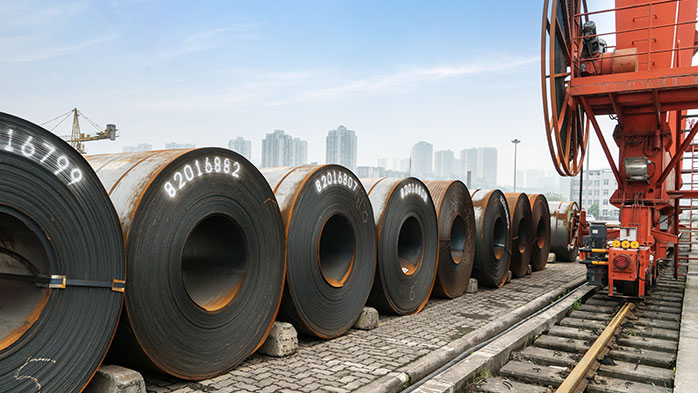 The coronavirus outbreak in Wuhan has led to Chinese New Year holidays being extended and transportation restrictions introduced in order to contain the spread of the virus.


Demand is normally weak during this period, but production continues as usual. Every day of lost activity across China could see demand fall by 2.5-3.0 Mt and transportation restrictions are likely to disrupt supply chains and production output in affected areas.

Background
In only 13 days from 16 January, the number of people infected with the coronavirus in China went from 45 to almost 6,000, plus over 9,000 suspected cases. On Wednesday 28 January, the death toll reached 132, with confirmed cases reported in 12 other countries, including the US, Japan, France and Singapore.

More than 60 million people in 13 cities in China have been fully or partially locked down since the virus outbreak. On top of this, the Chinese government has extended the Chinese New Year (CNY) public holidays, to delay the mass migration of people back to work. In Shanghai and nearby Suzhou in Jiangsu province, the holiday period has been extended further, until 9 February. The only industries still working are those on the exception list: gas, water, power, telecommunication industries, medical machinery, pharmaceuticals and necessaries including supermarkets, food manufacturing. In the last three days, more areas outside the Hubei epicentre are now taking steps to limit movement of people.

Where is Wuhan and is it important to steel? 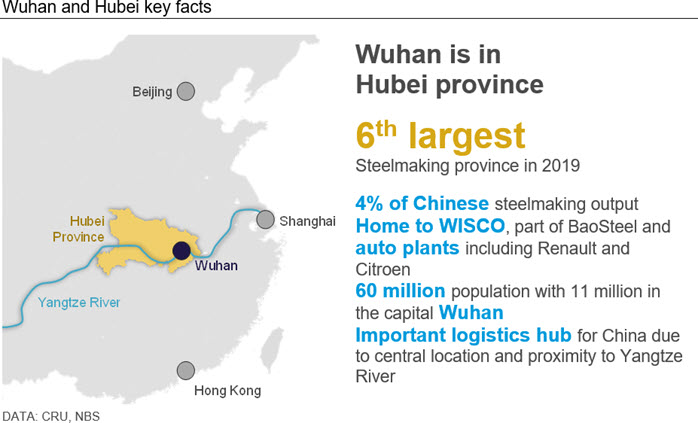 The spread of the coronavirus has coincided with CNY holiday, a period when steel demand in China is particularly weak as most people working in construction, manufacturing, infrastructure and logistics are on holiday. However, the effect on steel demand so far is limited as most construction activity does not restart until after the Lantern Festival, which this year is on 9 February. Construction is the biggest sector driving China’s 2.6 Mt of steel demand per day or 15-20 Mt per week.

Some multinationals such as Toyota have suspended production until 9 February, during which is already a weak seasonal steel demand period. Any further suspensions beyond this date will have a larger impact on overall steel demand. However, it is worth noting that the CNY is early this year and the weather is expected to still be cold when the market restarts – which would itself be unfavourable for activity in the construction sector.

Transportation is a major issue
In Shanghai and nearby Suzhou in Jiangsu province, the return to work has been delayed until 9 February. Suzhou is a key manufacturing centre, so any delayed restart will likely reduce near-term steel demand in the region as industries that manufacture or consume steel products are not on the exception list.

Demand is also affected by travel restrictions in the country. Public transportation is partially or completely suspended until further notice in some cities to combat coronavirus outbreak. The ability of people to travel within China is increasingly restricted. This is likely to further reduce labour availability across the steel supply chain and the restart of many industrial activities.

When will activity improve?
The question that remains uncertain at the moment is when the measures to reduce the spread of the virus will end. We are currently looking at activity improving when people outside Shanghai and Suzhou return to work next week. However, the spread of the virus is still accelerating, so some level of restrictions may well continue further into February and there is some evidence that this is now happening. All construction work has been suspended in in Henan province, Gansu (capital of Lanzhou) and Tianjin municipality. If other areas of the country follow this lead, steel demand will see a large hit.

Comparison with previous outbreaks is difficult as no two are the same. However, the effect of the SARS outbreak in 2002-2003 was annual industrial production growth falling by 0.8% and auto production levels declining by 5%. Sheet demand may be particularly affected as Hubei province is one of the largest automobile production regions in China. Longs demand will also be impacted as labour intensive construction activities will stall.

When the outbreak is eventually contained and life returns to normal, we are likely to see a short-term boost in activity as demand held back during the virus outbreak is released.

Steel supply at risk
The centre of the outbreak, Hubei province was the sixth largest steel producing province in China during 2019, according to the NBS. This represents 4% of Chinese production. The four largest steel producing regions – Hebei, Jiangsu, Shandong and Liaoning – are coastal provinces in the eastern and northeastern parts of the country and are not near the epicentre of the outbreak. 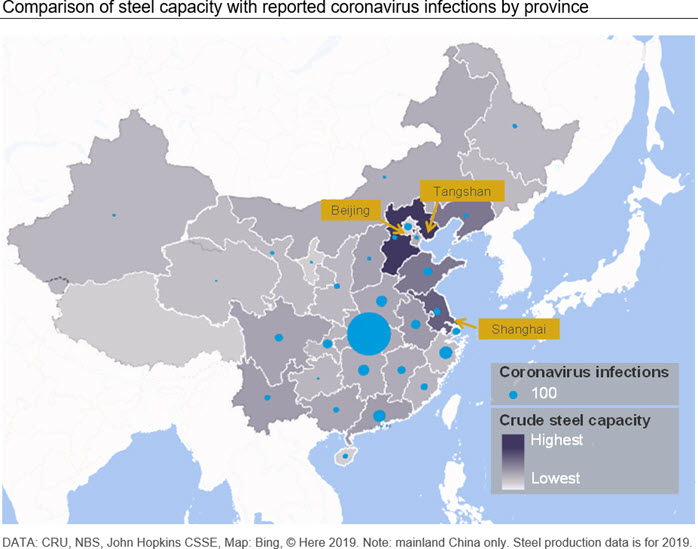 Although demand is usually weak over CNY, steel production does not stop. In previous years, flexible EAF producers have lowered production over the period but blast furnaces (BFs) cannot be switched off so easily. With BF-BOF producers output higher than demand over the holiday, this usually leads finished stocks higher over a 2-3-week period around CNY. This year, the measures in place to limit the coronavirus spread are likely to result in different behaviour from producers:

This combination of continued BF-BOF steel production and reduced rolling mill output may result in a build-up of semi-finished billet/slab stocks at the expense of finished products. Export outlooks may also be limited, particularly on the flat products side as higher costs relative to the current marginal suppliers and skeleton crews at ports restrict outgoing steel.

There is a chance that measures to contain the virus are extended further. If that happens, transportation restrictions and reduced labour availability at local iron ore and coal mines may lead to shortages in steelmaking raw materials, forcing producers to idle blast furnaces.

Over 90% of Chinese coking coal is supplied by domestic mines leading to supply of this crucial steelmaking resource at serious risk of interruption. 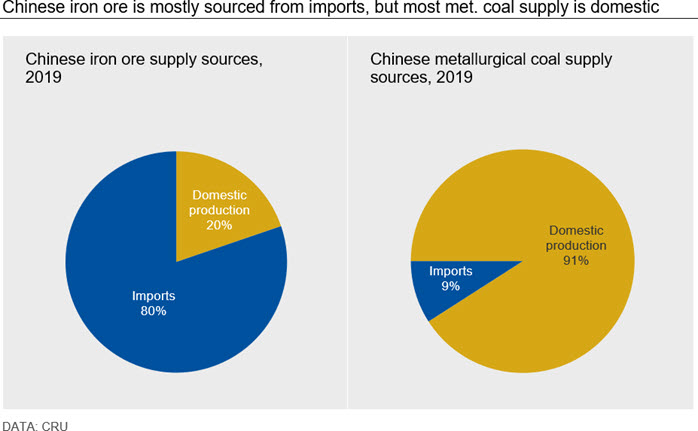 Price impact: bad short term but pent up demand may lead to a spike
In the short-term, the outlook for steel prices is poor. Demand will be extremely weak when the CNY extended holiday ends and work resumes on 3 February. This is the official date the SHFE is expected to reopen, although this may also be delayed. Commodity prices around the world have fallen in response to the virus outbreak and steel futures traded in Shanghai could follow this trend and drive physical steel prices lower in the days that follow.

Further forward, the outlook for prices looks better if supply is restricted. Although BOF production has continued so far, even in Hubei, transport restrictions – including the movement of people – are likely to disrupt supply if the virus outbreak expands. Traditionally, the build-up of stock during CNY is used to support strong seasonal demand during late Q1 and through Q2. This could mean supply is limited while steel demand could see a boost from pent-up demand from both consumers and delayed construction projects. However, the timing of this price spike will depend on if and when the virus outbreak is contained. Key here will be the release of inventory data after CNY and if the virus spreads to the northeastern provinces, the source of over 50% of production.

What will happen to Chinese steel exports?
If demand remains weak and steel production continues without disruption, we could see a glut of Chinese steel on the market. Could that glut hit export markets? From a cost perspective, longs exports from BOF producers may be competitive, but sheet producers less so. In both cases, Chinese raw material costs are currently higher than international costs, so any large fall in the export price would hurt profitability and thus unattractive compared to lowering production. Even so, information from traders in Asia is that they have held off on restocking as they anticipate more Chinese material in the market and Asian import prices to fall.

Globally, there is also be potential short-term upside for steel prices. We have not yet had any confirmation that ports are closed, although we understand that at least one port is operating on a skeleton staff due to local transport restrictions. If the virus spreads further and transportation is further restricted for public health reasons, exports from China could very quickly become limited.