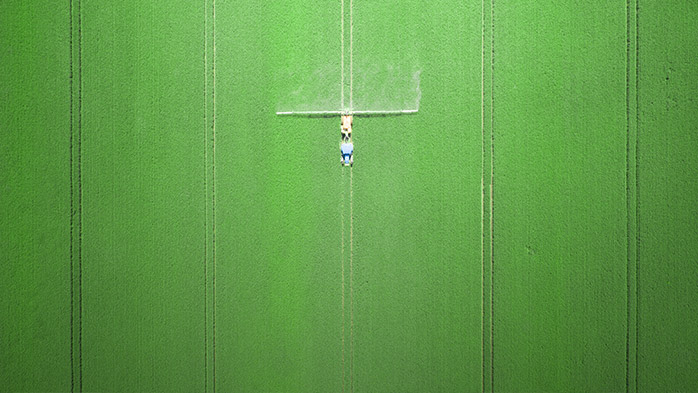 The ammonium sulphate (AS) market had been on a path of price decline since 2013, triggered by the surge in Chinese production and exports.


The global AS market operates in a system which can be considered supply driven demand, as around 90% of supply is a by-product. By-product producers use price as a lever to stimulate demand to absorb available production. Despite the rapid increase in Chinese AS availability there has been a trend of investment in synthetic capacity. This insight explores whether recent AS price increases will affirm the rationale for synthetic capacity and how regional price premia have influenced investment, topics which are covered in more detail in CRU’s upcoming Ammonium Sulphate Market Outlook, published in July 2021.

How have prices recovered from 2020 lows?

AS prices have responded to the global increase in fertilizer prices with CFR Brazil increasing from $138 /t in 2020 Q4 to $245 /t by end-2021 H1. The US granular market has also rebounded strongly with FOB US Midwest prices increasing from $185 /st in 2020 Q4 to $315 /st by end-2021 H1. On the surface the recovery in AS prices looks significant but when compared to trends in the wider nitrogen market the increases are less impressive. As a nitrogen fertilizer AS pricing can be considered relative to broader nitrogen prices, with the urea price in $ /t N the point of comparison. AS contains additional sulphur nutrient so it has historically sold at a premium to urea when priced in N tonnes. The declining price trend for AS has also driven a declining nutrient premium, with the current surge in AS pricing doing nothing to arrest this decline. Throughout 2021 Q1 the AS nutrient premium increased across both caprolactam grade and granular markets but this trend has since reversed with the US Midwest granules priced at a 50% premium per N tonne with CFR Brazil at 10% and FOB China at a discount of 13%. The nitrogen premium is volatile, with the frequently changing urea price the major driver of volatility. In 2021 H2, a decline in urea prices will likely strengthen the AS premium but recovery is expected to be limited. 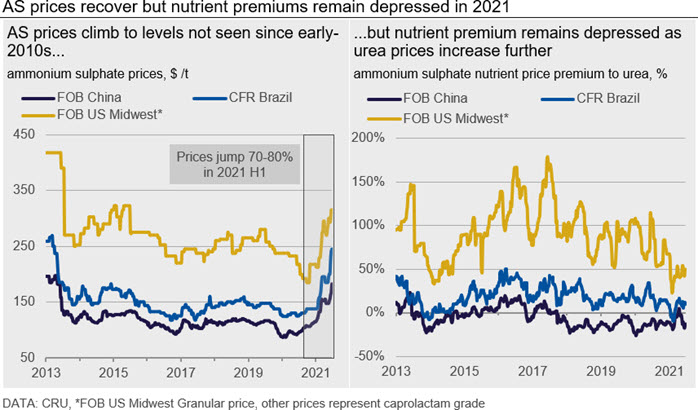 The growth in Chinese AS production and exports has locked the global AS market into a state of supply driven demand growth. Chinese caprolactam-based production has increased at a relentless pace with AS supply increasing by 10 Mt in the decade to 2020 (up 330%) and exports increasing by 8 Mt (up 640%). By-contrast, the global traded market has only increased by 4.5 Mt in the decade to 2020 with Chinese export expansion pushing increased volumes back into domestic markets. The growth in Chinese supply has triggered caprolactam-based capacity closures in Asia, Europe and the US along with rewriting established trade flows. The introduction of anti-dumping duties by the US and Mexico on Chinese AS has generated a two-tier traded market.

Markets such as Brazil have become a major focus of Chinese export sales and the continued increase in export availability has driven a jump in demand. Brazil has increased imports to total 2.96 Mt with 75% originating in China. Brazil has also undergone a shift in product preference which China has been able to service. Brazilian AS imports are split 15:85 standard: granular, although the vast majority is Chinese compacted granules and not the crystalised granules typical of US and European markets.

The increased competition in Brazil has pushed European and CIS suppliers to find alternate demand destinations such as the granular markets in the US which are protected from Chinese product by sanctions and domestically in Europe where compacted granules are not generally accepted.

How does voluntary capacity fit into a structurally oversupplied market?

The structural oversupply which is seen in global markets is not replicated across all regions which has driven the decision to commission new and expanded, voluntary, synthetic capacity. In a market which is dominated by by-product supply, the addition of synthetic capacity has typically occurred in regions which have an inland freight advantage (such as the northern US/Canada), have access to low-cost raw materials and/or area which aims to increase integration into AS as a raw material. The conversion of Nutrien’s phosphate granulation capacity to ammonium sulphate benefited from low-cost raw materials and protected inland access to the Western Canada and US Midwest granular AS markets. By contrast, PhosAgro’s addition of AS capacity has allowed the company to reduce the requirement to purchase AS from third-parties whilst also benefitting from low-cost raw materials. A consequence of PhosAgro’s actions in Russia has been to increase availability of crystalline supply in the Russian market with producers adding capacity to upgrade this product to compacted granules and move increased volumes into the international market.

The investments in synthetic and compaction capacity have targeted the US granular market where the nutrient premium is not the only important pricing factor. Using the US market as an example the chart below shows CRU’s calculated production cost range for North American synthetic AS capacity and the implied average margins vs. US Midwest granular price.

Despite the decline in nutrient premiums from the 2017 peak there was a recovery in average margins as raw material prices declined. In 2021, the recovery in AS prices have been mirrored by increases in ammonia and sulphur prices which has increased the cost of production range which has benefited producers with on-site ammonia production. 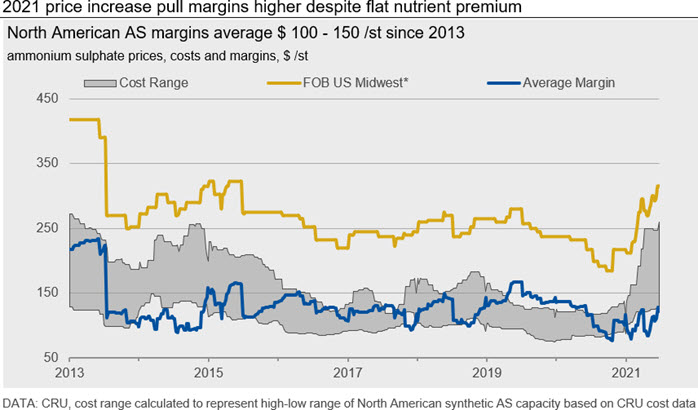 Is a change in premia/margin environment needed to maintain synthetic supply?

The decline in nutrient premiums for AS has become an established trend in international markets which the recovery in prices in 2021 has failed to address. Despite the overall trend in nutrient premiums, production margins in North America have been relatively stable since 2013. The decline in US prices and average margins from the 2019 peak coincides with the commissioning of Nutrien’s expanded capacity with around 30% of the new production remaining in Canada and the remainder moving south to the US market. The reversal in price trend has provided a significant margin boost to the lowest cost producers but has also increased the attractiveness of the US market to imports from offshore granular, or potentially compacted granule, producers.

CRU’s latest Ammonium Sulphate Market Outlook offers a comprehensive view of AS supply, demand, trade, costs and pricing, with all metrics forecast to 2025. It also includes further analysis on topics such as nutrient premia, substitution driven demand growth and Chinese production and export trends to fully equip subscribers with the necessary information and knowledge for their decision-making.