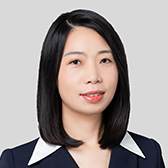 Domestic Green Petroleum Coke (GPC) prices in China have begun to ease in November, due to an ample supply in the region, with local oil refineries gradually lifting their UT rate after entering Q4 2021. In the meantime, GPC producers are trying to destock their warehouses as soon as they can. This comes after a heavy snow early this month paralyzed major transportation in northern China.

China’s 2A 2B prices have marginally increased by RMB 325 /t m/m ($ /t) to stay at the level of RMB3,600-5,200 /t while its 3A 3B grade GPC prices have increased by RMB150 /t ($28 /t) to trade at the range of RMB3,200-4,000 /t on the support of relatively higher price levels at the beginning of this month. However, GPC offers for 3A 3B grade from state owned companies stopped climbing up and were even retreating since last week, with prices in some regions falling marginally.

Moreover, prices for material from local refineries have been declining since the beginning of November, which has driven domestic GPC prices lower. A falling trend is expected to be sustained over the short-term, based on increased supply and weaker demand.

The slower rising pace on China’s GPC market has also been passed to domestic Chinese Calcined Petroleum Coke (CPC) and anode prices so far this month. 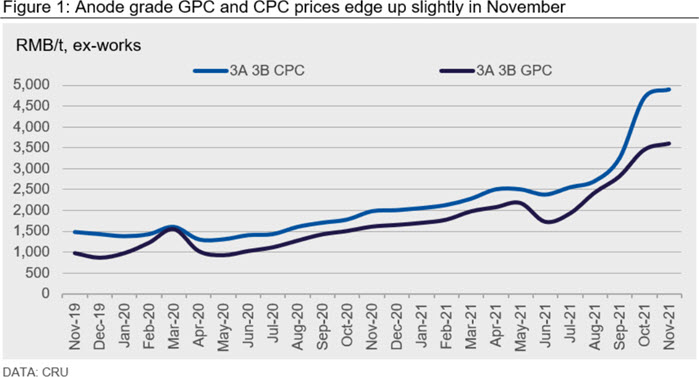 China CPC export prices remain inflated this month on the support of some high deals concluded at the beginning of November. The prices are traded at the range of $790-820 /t, up $15 /t m/m, but offer prices are moving down to around $750-780 /t in late November following lower raw material costs of GPC. There is also less buying interest from aluminium smelters in ex-China regions, who found alternatives in other markets for lower prices in those regions. However, there has been no deals yet reported to confirm the offer range before CRU’s our publication date.

Rest of World GPC and CPC

As the Q4 CPC negotiations are being finished, prices are being settled at notably higher levels than in Q3. This is the result of higher raw material costs and a tighter supply/demand balance. Chinese GPC and CPC prices are driving the global prices higher and tightening the balance outside China.

In Europe, there were indications of CPC contracts above $600 /t, however the confirmed ranges are lower than that, at $550-$595 /t. The increase in the price against the previous quarter also reflects a lower supply, as one calciner in the UK has shifted part of production to needle coke and OMV in Austria has declared force majeure on one calciner.

In the US Gulf, there has been a limited number of already concluded deals, as the market is on wait and see mode and looks for direction. The range of deals so far is narrower than in Europe, at $520-$535 /t. On the supply side, refinery closures at Alliance and Norco means lower supply of GPC which translates into higher competition for domestic GPC volumes.

The CPC price outside China is expected to be on a wider range by the end of the quarter negotiations. That is because the later deals are being closed at lower prices, supported by a weakening GPC price in China and a weakening LME aluminium price compared to earlier in the quarter.

From the lithium-ion batteries powering our sustainable future, to printing inks, insulation materials, and the rubber for safe and reliable vehicle tyres – technical carbon is a vital component for many of life’s essentials. But as regulators push for further reductions in the use of fossil fuels and industries embrace new ways of working, the supply of raw materials for many of these important products is under threat.