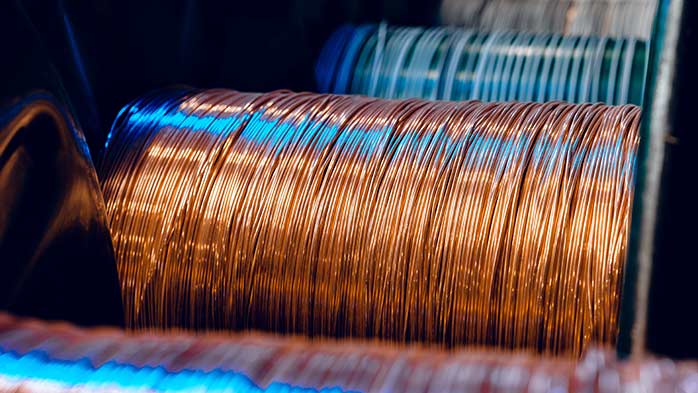 CRU expects global insulated metallic wire and cable consumption will grow by more than 5% y/y in 2021. However, our forecast for 2021 global cable demand has recently been downgraded by approximately 38 kt conductors, predominantly due to China.

A slowdown in the country’s economic growth, such as in the construction sector, is the main reason behind the recent downgrades. Also, to note, global automotive cable demand has weakened in 2021 H2 due to a prolonged semiconductor shortage.

For 2022, we forecast total cable demand to grow once again by healthy rates above historical average levels, as many countries and regions still have ground to make up from the losses experienced during the pandemic.

In our 2021-2026 forecast, CRU also downgraded China as we expect less investment-led projects to support cable demand e.g. lower investment in electricity grids. Furthermore, while we believe the Chinese real estate sector will experience robust project completions in the near-term, we expect it will decelerate noticeably in the mid-term as the market restructures.

Offsetting this, as part of our interim update in December, we have also upgraded North America’s mid-term forecast mainly driven by the USA, thanks to the recently approved Infrastructure Bill. Beyond China and North America, emerging markets and green energy developments will be increasingly important drivers for future cable demand growth over the 2021-2026 time horizon.

This change in dynamic feeds into our views for 2021-2026 cable products performance. Increased investment in US housing, transportation and utility sectors will drive higher demand for LVE and power cable. However, lower investment by China’s State Grid, the world’s single largest cable consumer, will lead to lower demand for power cable. 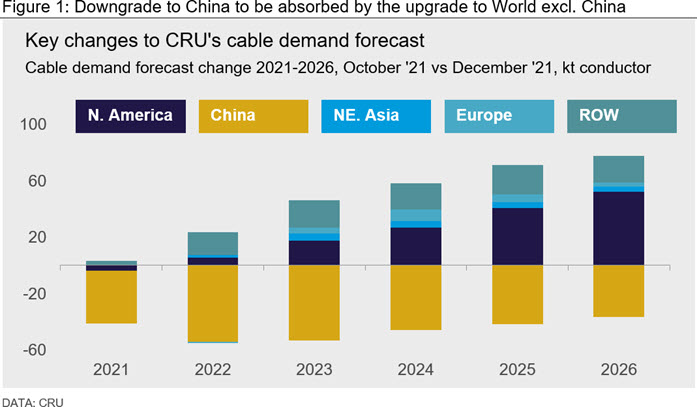 While the majority of the major markets were back to normal activities and deployment rates by the start of 2021, second or third waves of Covid-19 and related variants did act to dampen cable demand in certain markets. India is a prime example.

Cable demand here suffered once again during 2021 H1 and it could be argued it failed to take off in 2021 H2. However, the situation was far brighter in both Europe and the US this year, where optical cable demand rebounded strongly, posting double-digit growth. Demand in the US has been particularly robust, spurred on by elevated FTTH deployments enabled, in part, by the RDOF program, but also due to rising capex budgets and increasingly aggressive connectivity targets at carriers.

In terms of current sentiment, according to CRU’s Fibre Optic Cable Index (FOCI) in November, the survey confirmed that the rapid pace of market expansion, which has dominated much of 2021, has indeed stabilised or even reached its peak. This month’s Global FOCI reached 127.0, this is down 0.8 points from October’s 127.8. December’s FOCI also edged lower to 124.5. However, CRU’s Price Index (part of FOCI) has seen its previous record of 152.7 smashed with December’s level increasing to 160.0. It seems that while demand may be normalising, prices remain on an upward trajectory.

Reviewing the biggest development of 2021, the CM tender awards were met with relief and optimism by the global industry, despite being announced late. The tender settled 20% and 58% higher than the prior tender in terms of actual demand volume and weighted average cable prices, respectively. CRU has since upgraded its forecast for Chinese optical cable demand in 2022 in line with these higher tender volumes. We believe a renewed focus on domestic demand, coupled with an increasingly restricted export market will ease price pressure in markets such as Europe and India throughout next year.

Optical cable demand in the US and Europe is forecast to remain buoyant over the coming years, with demand in the latter driven by the UK and Germany which are rapidly rolling out fibre to the ‘last mile’ as part of an ongoing shift to FTTH from FTTC/N network architecture. 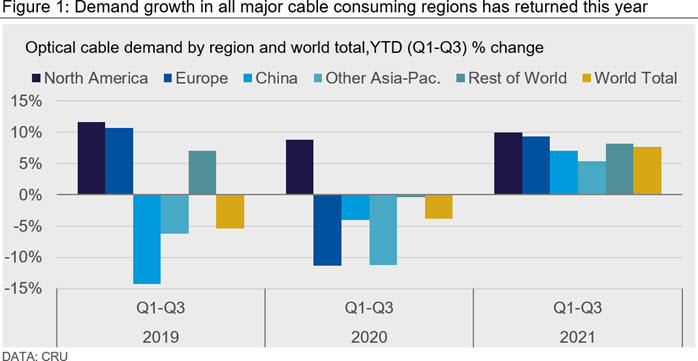