Although copper prices have fallen by over 50% since they reached a peak in 2011, Chinese copper smelters have not reduced the pace of capacity expansion, thanks to historically high treatment and refining charges (TC/RCs) over the same period.


Despite excess smelting capacity and progressively tighter concentrate markets, we expect the Chinese smelting industry to continue growing during the next four years. In fact, there is potential for even higher growth rates than we currently expect in our base case scenario, due to the short lead times associated with the development of new smelter projects and changes in project status.

There are several reasons for this situation. First, there is room for China's cathode self-sufficiency rate to increase further. Even though China has been the biggest producer of copper cathodes in the world for several years, it still needs to import between 30-40% of its total cathode consumption every year, which means that government support, in the form of low-cost loans, environmental approval and access to land, among other, is readily available for smelters. 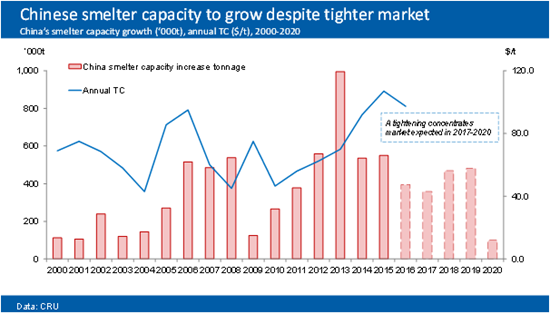 Second, the Chinese economy has been slowing down and producers from traditional industries like coal, steel, aluminium and cement have been struggling to survive, not to mention make a profit. In contrast, Chinese copper producers have remained profitable due to the high TC/RCs. According to the latest data from China Nonferrous Metals Industry Association (CNIA), profits obtained by Chinese copper smelters hit RMB 2.0B in Q1 2016, up 41.35% y-on-y. The high levels of concentrate imports to China registered during the first half of 2016 are a visible consequence of these profits.

Third, rising copper prices provide additional incentives to Chinese copper smelters. CRU is forecasting refined copper prices to reach the bottom of the cycle in 2017 and to start rebounding from 2018 onwards. Although TC/RCs are expected to fall over the same period, it should be noted that some Chinese smelters prefer a scenario of rising copper prices to one of rising TC/RCs when their copper concentrate purchases are not strictly hedged. In those cases, being exposed to an increasing copper price trend might be an opportunity for significant profits. 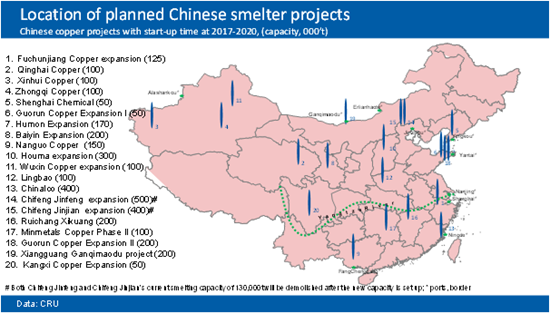 Over 70% of the increase in global smelter capacity during the next four years will take place in China. Thus, the development of China's smelter projects are an important factor for the global copper concentrates market balance and has drawn the attention of market participants. How, whether and when each of these projects might be commissioned has been of great interest to different parties.

Our view is that the potential for most of the planned projects to start operating might be higher than many in the market expect. To support this view, in the July issue of Copper Studies we conduct a detailed analysis of Chinese smelting capacity during the period of 2017 to 2020. We consider the location of each project, its transportation requirements and availability of raw materials; we also analyze the capex of these projects, as well as the technology and ownership of each of them; finally, we provide background information for each smelter project and our view on its development outlook.