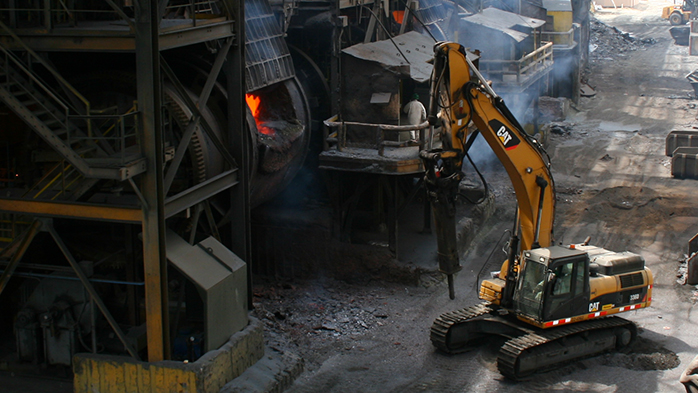 CRU forecasts that blister production will grow this year by 4.6% y-o-y to 16.86Mt, compared to a 2.4% increase in electro-refined production to 18.41Mt. Although the difference will be partly offset by a further decline in the use of high-grade scrap due to persistent tight scrap markets, we nevertheless expect that the year will see an increase in blister stocks of some 300,000t contained copper. This will support a continued strong growth in refined copper production in 2017, even in the face of a sharp decline in mine concentrates production growth.

In CRU's November 2016 issue of Copper Studies, we identify where the stock build is taking place and the underlying factors. We also give an update (from the January 2015 Copper Studies) on the custom blister sector, the key players and global trade flows in custom blister and anode.

CRU's bottom-up analysis of blister and refinery production, along with conversations with industry players, leads us to expect that much of the stock build is in Zambia and China, and this is supported by data on international trade flows. For some months we have been hearing from our contacts in China that the blister market is well supplied with high refining charges (RCs), while a soft market with higher RCs has also been noted by contacts in other regions.

As alluded to above, a major underlying factor has been the establishment of new smelting capacity with no associated refinery capacity. In Zambia, First Quantum's Kansanshi smelter, which started operating at the beginning of 2015, has continued to ramp up and production is now close to its 300,000t/y capacity. The blister is all processed to anode before export, with China being the main destination. Also in Zambia, both Glencore and Vedanta have ceased operations at their refineries, but continue to operate their smelters. In Glencore's case, this is at a reduced level due to the temporary closure of its Mufulira and Nkana mines in response to low prices, although custom concentrates are still being processed. While all of Glencore's production is for the custom market, Vedanta is shipping most if its product to India, to be processed at its facilities at Tuticorin and Silvassa. 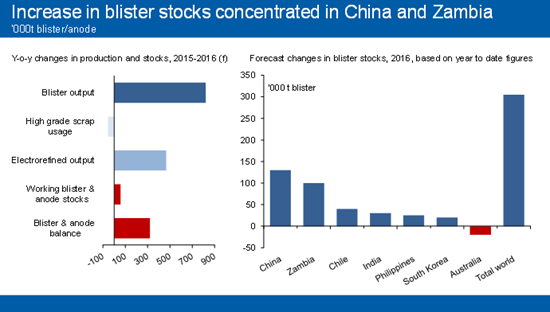 Glencore has also brought on stream additional smelting capacity at its majority owned PASAR operation at Leyte in the Philippines. Beset by problems in the first half of the year, production is now believed to be ramping up but still below previous expectations. Much of the blister is processed to anode before selling to third parties, and CRU estimates that for the year as a whole the tonnage of surplus blister/anode will amount to 36,000t, rising in 2017 to 74,000t. So far, in the year to August, only 6,500t has been exported (based on trading partners' imports).

Within China, two factors underlie the increase in blister stocks. Firstly, domestic blister production has risen by more than refinery output as the country's small operations have responded to a good supply of concentrates with favourable TC/RCs. Some producers have told us that they have surplus blister production that they are unable to place. Secondly, imports have increased sharply and in excess of requirements. This is despite a reduction in anode production from high-grade scrap, which has been in tight supply all year.

Recent topics include "Mine cost trends and short-term forecast", "Copper smelting processes and technologies" and "Chinese wirerod industry to suffer further from overcapacity." Future issues will cover the copper scrap industry in China and smelter costs in China, amongst others.