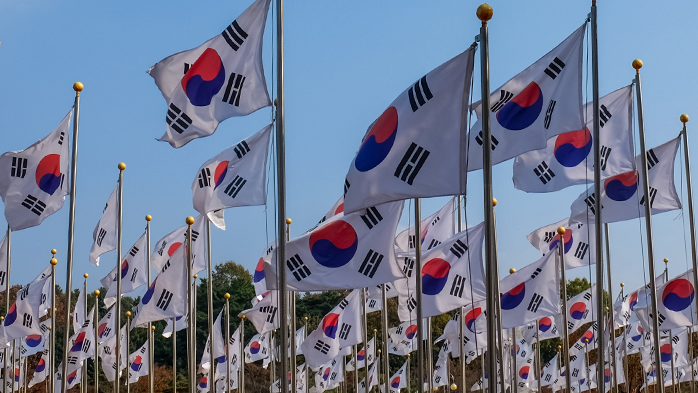 The reasons for this were multiple. Firstly, we believe that the South Korean government will take action to protect both the steel industry and the shipbuilding industry. Both are key industries and if closures occur, it will cause widespread unemployment.


Furthermore, shipbuilding is known to be a cyclical industry; low oil prices have led to exceptionally low freight rates over the past two years and this has provided little incentive for shipping companies to expand their fleets. It is not unprecedented for shipbuilders to have to weather out a several year period of poor conditions in ready to be there for increased in demand in years ahead.

However, it seems that support is gathering momentum for closure of a plate mill. BCG recently released a report on behalf of the Korea Iron & Steel Association, recommending that annual cuts of heavy plate production in Korea to the order of 4 - 5 Mt are made. Last week, POSCO's CEO suggested to Joo Hyung-hwan, the Minister for Trade, at an official visit to the steel mill, that the company is considering suspending production by one of the mills at the company's Gwanyang site, reducing POSCO's plate making capacity by 1 Mt to 6 Mt.

What has changed?
There are growing indications that government support for struggling industries is limited. After spending more than 7 trillion won on helping shipbuilders remain solvent, the government chose to allow Hanjin Shipping to enter court receivership, disrupting supply chains worldwide, earlier this year. This caused a significant loss of confidence in the market surrounding other similarly unprofitable businesses.

The higher coking coal costs of the past month might be the final straw. We are forecasting that higher raw material costs will largely be passed on to finished steel customers. However, plate end use sectors are all struggling - mining, oil, shipbuilding. Mill's profit margins are already very slim and if the increase to raw materials costs can't be passed on, this could be the nudge required for additional plate making capacity to be brought offline.

Permanent closures?
We estimate that capacity utilisation was just 67% in South Korea in 2016. Suspension of the least profitable mills allows existing facilities to be run at higher utilisation and for marginal costs to be reduced, allowing the steel companies to weather out the worst of the bad conditions.

Approximately 1/3 of plate produced in South Korea is for the export market, although in recent months we have seen evidence that domestic buyers are turning away from imported material to purchase domestically produced reversing mill plate instead. The reality is that South Korean prices are higher than for Chinese plate, but sales to domestic users have a lower freight component than imported foreign material and mills are keen to preserve production volumes rather than concentrate on profit margins at present.

Albeit excluding the influence of the recent coking coal price increases, this graph demonstrates just how much lower production costs are for the main South Korean producers than for Chinese producers. Despite the plate market being oversupplied, it appears that there is still scope for South Korean mills to maintain their market share in the long run. 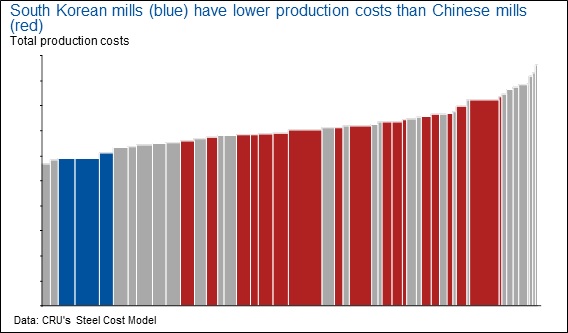 Therefore our base case remains that no permanent closures will be announced, although temporary (at least) suspension of some facilities would appear to be one possible rational decision in the short term in order to facilitate higher capacity utilisation. This would be in addition to the 1.9Mt plate mill owned by Dongkuk which was idled earlier this year.

Another consideration for mills is to consider whether it is feasible to adapt their reversing plate mills to produce other products, for example HR coil. Stronger demand from end use sectors has helped support the sheet market this year and this is evident by the price rises we have seen of $170 /t YTD for HR coil, compared to just $135 /t for steel plate (both Far East import prices, non-CIS origin material). Although not a cheap option, if steel mills believe that demand for steel plate will be structurally lower in years to come, then converting their production facilities may be a better option than idling their plate facilities entirely and reducing their finished steel output for the indefinite future.