A mere six months ago, we were trying to decide how much further the Fed might raise interest rates in order to reach the so-called “neutral level”. How quickly the tide has shifted.

Following the FOMC meeting which concluded on 19 June, Fed Chairman Jay Powell communicated that most of the committee was now focused on the downside risks to the US economy, namely slowing global growth, weaker trade and the lack of investment spending. The Fed did not raise interest rates at this meeting. However, it is once again, in “wait and see” mode until its July 30-31 meeting so that it can assess the outcome of the G-20 meeting between Presidents Trump and Xi as well as the next round of economic data which should provide insight into US economic activity during Q2 2019.

The Fed has achieved its dual mandate…sort of
The Federal Reserve was created in 1913 as a policymaking institution independent of political pressure. Since 1977, it has operated under a dual mandate from Congress to promote both low inflation and ensure full employment. In January 2012, Fed Chairman Ben Bernanke announced an explicit inflation target, which has been interpreted as 2.0%, bringing the US into line with many other central banks around the world. The Fed’s preferred measure of inflation is the “core PCE deflator”, which excludes the volatile food and energy components of the price basket.

There can be little argument that the Fed has achieved the “full employment” part of its mandate. The headline unemployment rate in May 2019 was reported at 3.6%, very close to the all-time low of 3.4% last reached in May 1969. 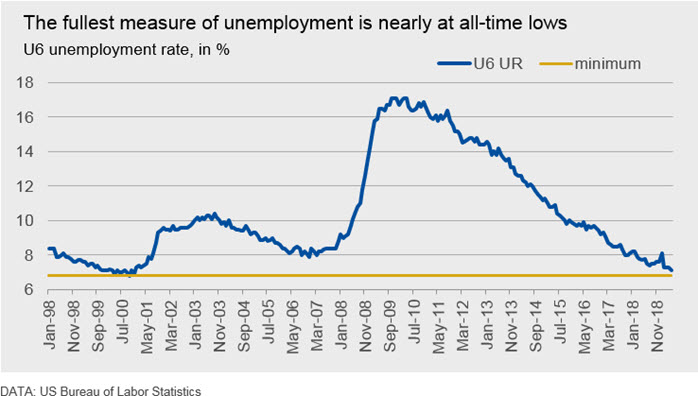 In the chart above, we illustrate the fuller measure of unemployment which includes part-time and discouraged workers, referred to as U6. In May 2019, the U6 unemployment rate stood at 7.1%, slightly above its all-time low of 6.8% which was achieved in October 2000.

The problem for the Fed is the inflation side of the dual mandate. The Fed began raising rates back in December 2015 but only managed to hit and remain at the 2% inflation level for a few months in 2019. However, since the December 2018 increase in the Fed Funds rate to its current range of 2.25%-2.50%, PCE inflation has declined steadily and is back to the lower levels seen in 2016. 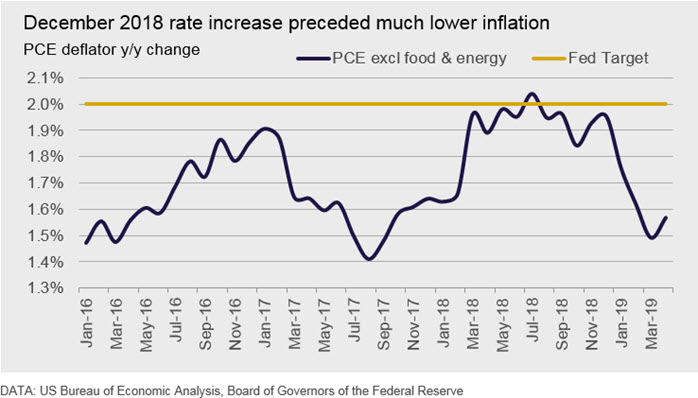 The Fed’s next move will be taken very carefully
Since the Fed has achieved the full employment part of its mandate, it is not required, necessarily, to cut interest rates to achieve the inflation part of it. The Fed is at a crossroads and, as the communications after its June 2019 meeting indicate, it has adopted a “wait and see” approach to its next step.

CME Group produces its “Fed Watch” tool to provide insight into what investors in Fed Funds futures think the Fed will do in terms of interest rates at its upcoming meetings. The chart below illustrates the position of market participants as of 11 June 2019 and shows the probability distribution of their rate expectations. 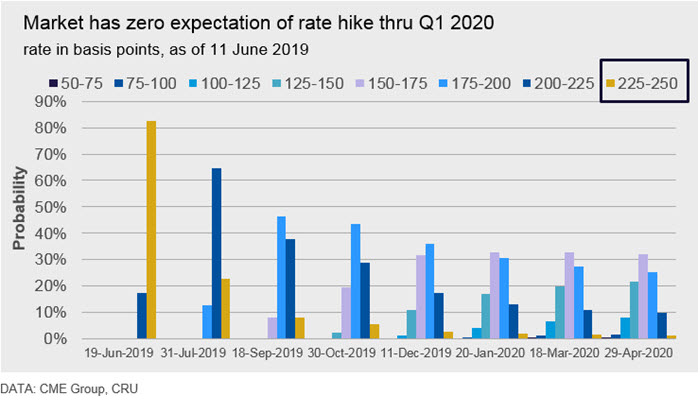 We can see that a large majority of investor positions as of 11 June expected the Fed to hold rates steady at the current level (gold bar) after the June meeting, which turned out to be the case.  However, when we look at expectations for the July meeting, we can see that more than 60% of investor trading positions in Fed Funds futures are pricing in a 25 bp rate cut (dark blue bar). As we go further into the future to the April 2020 meeting, it is clear that market participants are positioned for additional rate cuts. Notably, at this moment in time, there is zero expectation on the part of these investors, that rates will rise from the current range.

Just because the market expects the Fed to cut rates, does not mean that it will. In fact, evidence of the value of 1-month Fed Funds futures indicates that the markets are slow to adapt to the Fed’s signals of a rate hike, even when the forward guidance is quite clear. The chart below illustrates this point—the gold line is the actual Fed Funds month average rate and the dark line is the previous month’s 1-month Fed Funds futures price. We can see that, even in November 2015, investors expected rates to stay the same, even though the Fed was signalling its intent to raise interest rates at its upcoming December meeting.

The graph also shows that, during 2018, Fed rate increases were not anticipated by investors, even though they were operating in a rate rising environment. This is illustrated by the black line (investor expectations) being below the gold line (actual Fed actions). 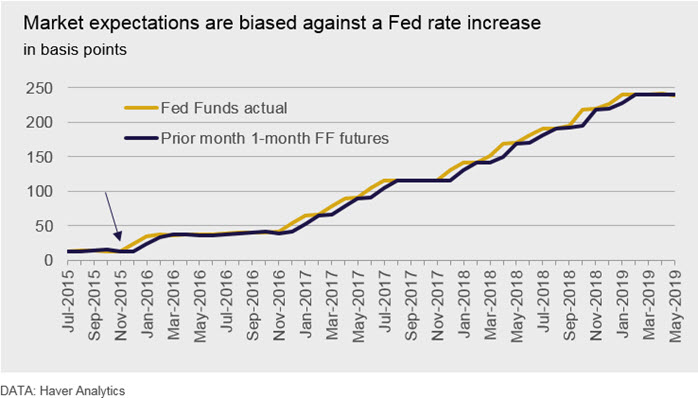 The Fed is under pressure to cut rates not only from financial market participants, but also from President Trump who has expressed his opinion very publicly that the Fed caused the current moderation in economic activity by its most recent rate rise in December 2018.

Let us not forget that the Fed played no role, whatsoever, in significant policy decisions taken by the Trump administration, many of which have not served to boost the economy.

The Fed to the rescue…again
During the Global Financial Crisis (GFC), the Fed employed several tools to help stave off a recession. It dropped the Fed Funds rate to zero. It purchased mortgaged-backed securities (MBS) to shore up the US housing market and bring down longer-term interest rates. It purchased US treasuries across the yield spectrum to promote higher liquidity and support its interest rate cuts.

In the next slowdown, the Fed has already communicated that it will use the Fed Funds rate as its primary tool. Fortunately, it now has 225 basis points of interest rate decreases to play with—it would take nine 25 bp rate cuts to hit the zero bound again and we are not expecting the next downturn to look anything like the GFC. The Fed will finish its balance sheet run-off in September 2019, on schedule, and it is holding a much higher level of reserves than pre-GFC, which means it has more ammunition at its disposal to stabilise the banking sector, which, itself, is more resilient then pre-GFC.

Even though the US housing market is rather soft, we do not expect the Fed to buy MBS again. Rather, dropping the Fed funds rate will feed through to lower mortgage rates as well as lower financing rates for big ticket consumer items like appliances and vehicles. Put another way, an interest rate decrease will support consumer spending, which is the only real driver of US economic growth at the moment.

In theory, lower interest rates should spur capital spending. However, in the current environment of high uncertainty around global demand, which has been a negative for manufacturing activity, we do not expect lower interest rates to translate into higher demand for commodities. In fact, the transmission channel to commodity markets will be a stronger dollar and potentially weaker commodity prices.

Since the dollar began to appreciate in mid-2018, after the ECB decided not to go down the path of fully normalising monetary policy, the dollar has been bolstered by a 3-legged stool of (1) higher interest rates relative to the Eurozone; (2) higher economic growth relative to other major economies and (3) the dollar’s safe haven status as the world’s primary reserve currency. Our Greenback Dashboard below shows how the sentiment around these key factors affects expectations for the value of the dollar. Currently, on balance, market conditions favour a stronger US dollar.

Since the ECB has announced that it will not raise interest rates before mid-2020 and is even considering another round of quantitative easing (after having just ended the last one in December 2018), a rate cut by the Fed means that the dollar is still a better investment than the euro. 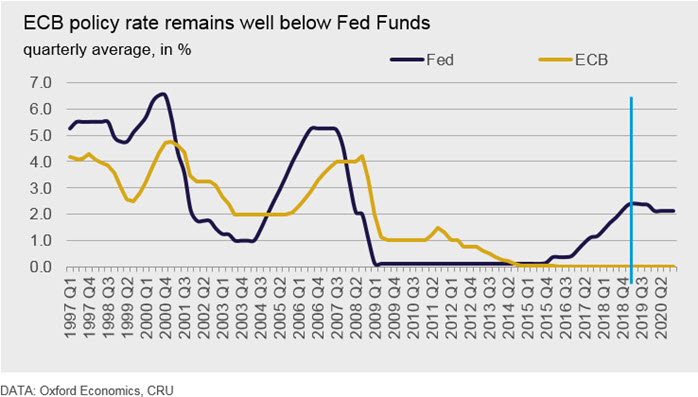 Even with a Fed rate cut in December, the dollar will remain relatively strong around current levels
Our June base case forecast expects the Fed to cut rates by 25 bp in December 2019, bringing the Fed Funds range down to between 2.0% and 2.25%. Holding off the rate cut until December gives the Fed time to assess the evidence and communicate its views to the public, including guidance on the stance of future policy. Leaving the rate cut to December has the added advantage of allowing the Fed to act prior to the US election primaries, which begin in February 2020. There is certainly a strong possibility for the rate cut to happen earlier, particularly if the US-China trade relationship deteriorates and the US economic data released in June show a clear sign that the economy is decelerating faster than the current data indicate.

In terms of economic growth, cutting rates is a pro-growth measure and, as we noted above, would be targeted to keep consumer spending from decreasing. With the Eurozone economy already weakening, there is no disadvantage to the dollar from that front.

Cutting rates does not damage the dollar’s safe-haven status in any way since, again, this measure is being taken to ensure US economic stability. The only way the safe-haven leg of the stool might be made wobbly is if there is a significant breakthrough in the US-China trade negotiations which would eliminate the downside risks to global trade. Based on the state of the US-China negotiations today, our base case forecast does not factor in a US-China trade deal in 2019.

The main implication we can draw from lower US interest rates is that, in the absence of the ECB raising interest rates, the dollar is likely to remain largely stable around current levels. In fact, weaker US interest rates could leave room for other countries to cut rates to bolster growth or, at the very least, keep them steady in order to stem additional capital outflows. This would underscore the potential for relative dollar strength during the near term.

There is great uncertainty around our base case view of the Fed’s path of interest rates over the coming 12 months. Not only is US trade policy and potential retaliation from its partners very unpredictable, but just how much the current slowing of the world economy will affect the US is also unknown. In addition, aside from the usual challenges inherent in assessing the US economy itself, 2020 is an election year and the Fed does not want to be seen as influencing the elections results in any way. That said, we think the balance of risks is currently to the downside and that a Fed rate cut is much more likely than holding steady into 2020.

The dollar is the world’s major reserve currency, and with the ECB considering another round of quantitative easing and shelving interest rate increases until mid-2020, the repercussions of any Fed move will take on a huge significance in the financial, commodity and currency markets.