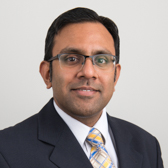 Following impressive fertilizer demand in 2017—with record imports of all nutrients—agricultural fundamentals in Brazil look likely to correct downwards in 2018.  For the first time in a decade, Safrinha corn area is expected to fall. This will be the main factor in dragging fertilizer consumption lower in 2018.

Overview of crop area dynamics in Brazil
Over the past two decades, Brazil has emerged as an agricultural powerhouse due its ample availability of arable land and suitable climatic conditions. Brazil is the world’s largest producer of sugar and the second largest producer of soybeans. The growth in agricultural production has led to a sharp rise in fertilizer demand.

A majority of the expansion in agricultural area has occurred within the Cerrado, a vast tropical savannah region in centre-west Brazil covering the states of Goias, Mato Grosso and Mato Grosso do Sul. Crop expansion has been driven by the conversion of pasture lands to soybeans and corn. The Cerrado has oxisoils/ferraols soil types, which are low in fertility and sulphur deficient, resulting in crop production limitations. This has underpinned the growth in fertilizer application rates and demand.

The cropping system in Brazil has evolved to include more soybeans, with area of this crop rising sharply. While most of this expansion has come from the conversion of inefficient pasture land, it has also come at a cost to full season corn area.

Farmers have moved to a double cropping system, with many choosing to plant soybeans in October/November and then plant corn immediately following harvest in February/March, known as Safrinha (second season) corn. Safrinha corn area has been rising in line with soybeans and now accounts for 70% of total corn production in Brazil.

Why is Safrinha corn area going to fall in 2018?
Total crop area is forecast to expand at a slower growth rate in 2018 compared to the record increases witnessed in 2016/17, owing to lower crop prices. Corn prices have been a particular concern for farmers.

Planting of full-season corn, Brazil’s first corn crop, which was complete by the end of November 2017 is estimated to have fallen by 10% y/y, with farmers favouring soybean planting. This first corn crop is more sensitive to crop price ratios and currently accounts for 30% of total corn area. 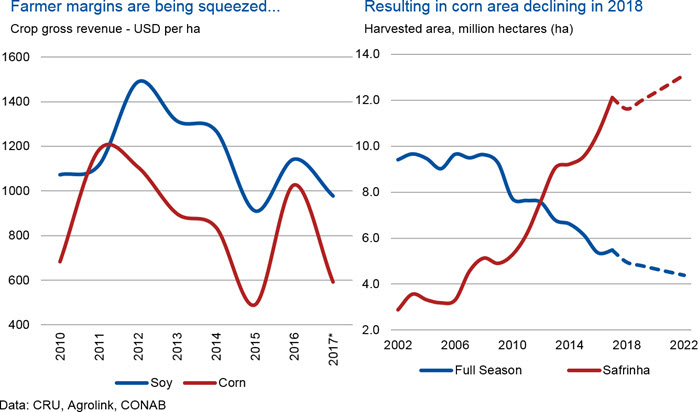 Delayed soybean planting in the current season is also partly responsible for the decline. Soybean planting was impacted due to a combination of dry and wet weather. Normally Safrinha corn planting must be complete by 10-15 March, otherwise yields tend to decline. Owing to the delays in soybean planting, it is estimated that up to a third of the potential Safrinha acreage would have to be planted later than usual, meaning this deadline would be missed.

In a downside scenario for Safrinha corn, if domestic prices weaken further and planting is not completed on schedule, area could drop as much as 10-12% y/y. Numerous independent consultants in Brazil are forecasting this level of decline. However, the upside for area is a potentially higher corn price. Brazilian corn stocks are currently lower y/y and if they fall further, prices could increase in Q1 2018 and provide a boost to Safrinha corn area, a positive for fertilizer demand. Moreover, high nutrient drawdown from strong 2017 production means farmers could increase application rates in 2018. 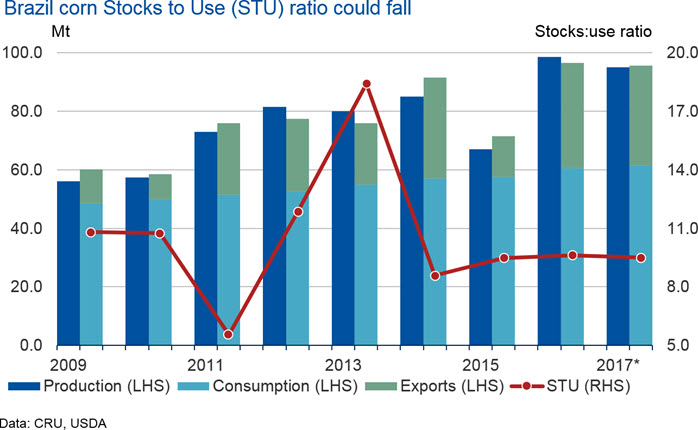 The table below portrays the effect of our 2018 Safrinha corn area scenario analysis on fertilizer consumption, which have been calculated by inputting these different outcomes in CRU’s nutrient demand models. Our 2016 and 2017 estimates of demand have been included in the first two lines of the table for comparative purposes.

Changes to Safrinha corn area are most likely to have a large impact on nitrogen demand, due to its intensive usage in corn production. In product terms equivalent, this would reduce urea demand by around 200,000 tonnes in the downside scenario, whilst increasing consumption by 50,000 tonnes in the upside scenario. Phosphate and potassium fertilizers are likely to experience less of an effect, since these products are more sensitive to changes in soybean area. For example, MAP and MOP demand would increase and decrease by approximately 20,000 tonnes and 80,000 tonnes in each scenario.

The outlook for 2018 fertilizer demand
Fertilizer demand growth in 2018 is unlikely to be repeated after such a strong step change in 2017 consumption. Lower crop prices are starting to apply downward pressure on margins after record production levels during in 2016/17. Low corn prices are the main driver of the anticipated fall in Safrinha corn area and farmers are expected to shift to crops such as cotton or leave land to fallow.

Although the prospects for soybean margins are better than corn, area in 2018 is expected to expand at a slower rate of 2% y/y, compared to preceding growth levels due to pressure on prices from large global supply. In addition to this, the marginal decline in fertilizer consumption will come at a time when there has been a high stock build up suggesting import demand in 2018 could weaken. Although 2018 is forecast to have a downward correction in fertilizer demand, consumption is still likely to be high in terms of historical levels. This should be aided by favourable barter ratios and a high nutrient drawdown in 2017 (meaning robust application rates may be needed in the next planting seasons).

In the medium term, consumption growth is likely to return in 2019-2022, supported by increasing area for corn and soybean, owing to rising global demand in feed, food and industrial markets. 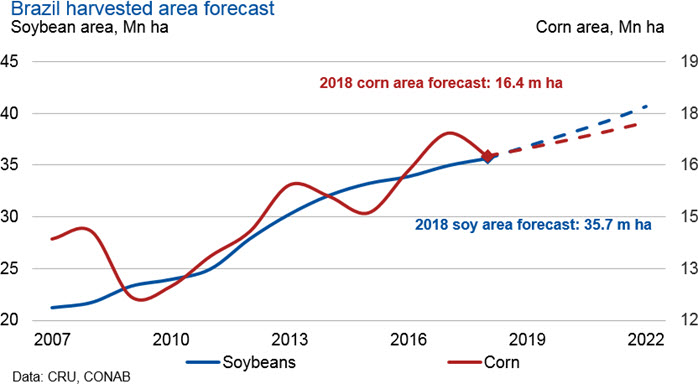 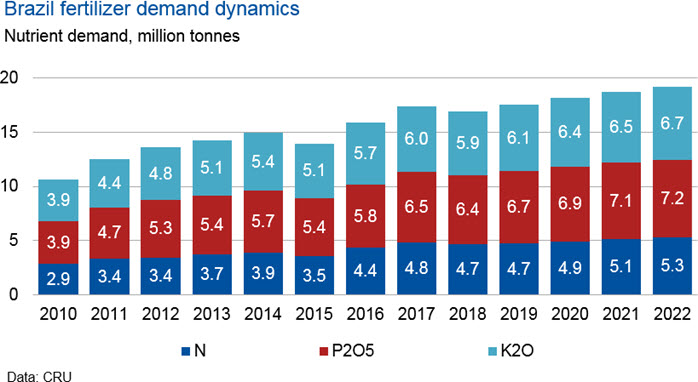