A meeting was held in Baoji in Shaanxi province on 28 June 2018, attended by forty-eight mining and metals companies, including lead & zinc miners and smelters.


As a result of this meeting, zinc smelters have once again decided to act to improve margins by cutting output in an attempt to lift TCs. Our Beijing office reports that not much time was spent on discussing cutbacks, according to meeting participants, but smelters proposed to cut production by 10% to try to force TCs higher and improve margins.

Chinese smelters cut back to good effect last year
A similar announcement was made in March last year, when a group of major smelters announced that they would take maintenance in March and April due to low TCs and poor profitability. At the time, the announcement was met with scepticism: the previous joint announcement by ten of China’s largest smelters, in December 2015, that they planned to cut 500,000t from their combined 2016 refined output, never materialised. TCs were still high and the effect of Glencore’s mine cutbacks were yet to affect the concentrate market.

By the time cutbacks were announced in 2017, mine cutbacks were beginning to take their toll and some smelters were struggling to operate normally due to a shortage of concentrate. It is therefore not clear to what extent the cutbacks in 2017 were voluntary. However, what proportion of smelter cutbacks were forced or voluntary last year is less important and they did materialise, with output falling by 6% year-on-year in April 2017 and by 11% in May 2017, briefly lifting revenues to $800/t.

As is the case now, there were several factors at play last year which caused output to fall so sharply in April and May: planned maintenance; low TCs; high power costs; environmental inspections and weak prices. The most notable of last year’s closures was Zhuzhou’s 100,000t/y smelter which has closed permanently. Other major smelters which cut back included Hangzhong, Zijin, Xing’an, Western Mining, Baohui and Huludao.

The cutbacks had the desired effect for some smelters, lifting spot TCs and revenues (see chart). It even encouraged smelters such as Chihong Zinc and Germanium and Jiangxi Copper to cancel maintenance in June last year to take advantage of higher prices. We believe that Chinese smelters aim for revenues of at least $450/t although as the charts below show, smelters have at times continued to operate at high utilisation rates, despite relatively low revenues.

Smelter revenues have fallen in recent weeks
We estimate that Chinese smelter revenues slipped below the $450/t target level at the end of last year, before recovering at the start of this year as prices climbed. However, with TCs only just beginning to recover and the arbitrage once again negative for imports, revenues for treating imported concentrate dipped below $450/t again in June 2018.

As we reported in our June China Focus and Zinc Monitor, some smelters had already cut output in 2018 Q2 due to low TCs and a shortage of zinc concentrate; several also took routine maintenance. The three Hunan-based smelters – Taifeng (100,000 t/t), Xuanhua (100,000 t/y) and Sanli (70,000 t/y) have yet to resume output due to a shortage of concentrate and Hangzhong Zinc (300,000 t/y) was recently operating at only 80% of capacity for the same reason. 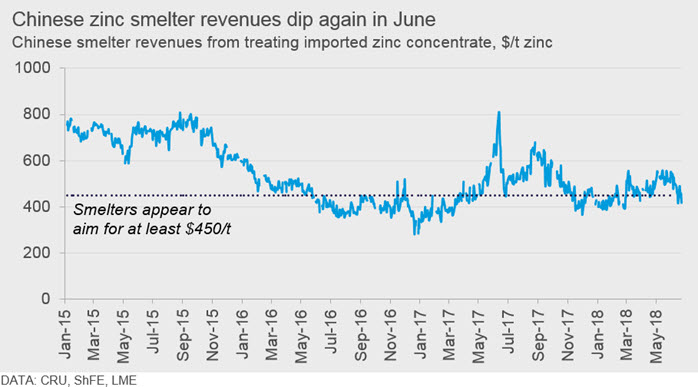 The latest news we have on Taifeng, Sanli and Xuanhua is that they are now unlikely to be able to resume production in August, as pollution issues at local concentrating mills were exposed by state media in late June. It now seems that any restart will be delayed until later this year, or 2019 Q1.

Luoping (135,000 t/y) in Yunnan has been operating at reduced rates for some months and was forced to close at the end of June by environmental inspectors, due to its failure to deal with a 100,000t zinc slag heap since the last environmental inspection in late 2016. It is currently scheduled to restart operations in late September.

Prior to the announcement of cutbacks in late June, several smelters, which had completed maintenance in mid-June, were planning to resume normal operations at the end of June. The announcement of coordinated action to cut output is clearly a tactic to try to reverse the decline in revenues and it is possible that some of the smelters who agreed to cut by 10% are already operating at lower levels and do not intend to further reduce output. We understand that smelters in Shaanxi province are struggling due to low TCs and low revenues, but we believe that the majority of smelters, especially State-Owned Enterprises and listed companies who have announced a production plan, are unlikely to reduce output unless they are suffering losses.

As concentrate availability begins to rise this quarter and next, there should be less of a need for market intervention to lift TCs. Given that TCs are already beginning to edge up and we expect concentrate market tightness to continue easing through the second half of the year, it is possible that real cutbacks will not materialise.

This may delay the sale of the SRB’s stockpiled zinc
We assumed that China’s SRB would return some of its estimated 250,000t of stockpiled zinc to the market this year and understand that the necessary authorisation to sell at least a portion of this metal was obtained earlier this year. However, if smelters are now acting to try to lift TCs and support prices, this may forestall any sale, given that some of these purchases were made to help support the market in the past.