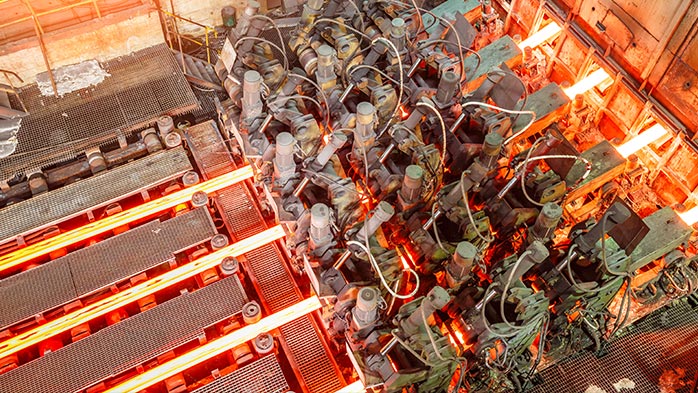 CRU believes that China is destined for a new phase of steel industry consolidation that could lead to a fundamental change in China’s steel industry landscape with ramifications reaching far beyond China.


This CRU Insight, the first of this series of CRU Insights by John Johnson (CEO CRU China), will focus on these important developments by explaining why this is happening now and the likelihood of success. In subsequent Insights, CRU will speculate about what the Chinese steel industry landscape will look like and will examine the implications in China and beyond. Indeed, we believe that the impact of this development may well be underestimated outside of China.

In 2016, the Chinese government published a “Steel Industry Adjustment and Upgrade Plan (2016-2020)”, as part of the 13th Five Year Plan, including “the promotion of mergers and acquisitions”. However, to-date, except for one mega-merger between Baosteel and Wuhan Iron & Steel, and a few more limited mergers (see table below), the implementation of this plan has been more focused on steel industry closures.

The Chinese government’s simple metric for measuring the industry concentration ratio is the proportion of total crude steel produced accounted for by the top ten producers. This plan clearly restates a target of 60% concentration levels to be reached by 2020 and 60-70% by 2025, but to-date, the industry is no-where near this target. 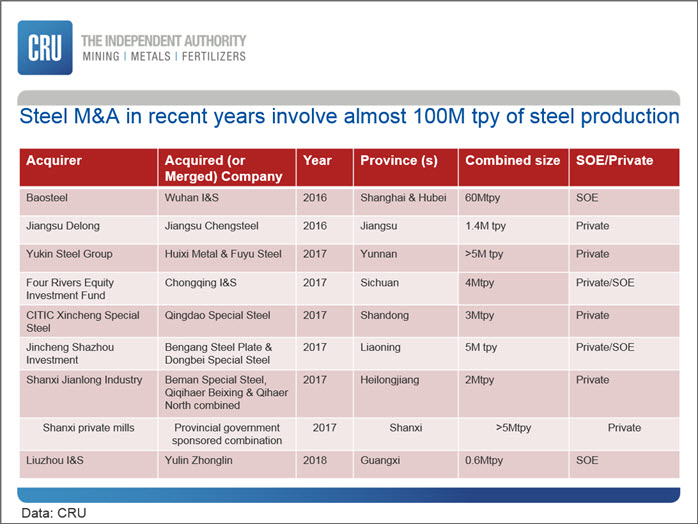 Steel industry ripe for consolidation now?
Planned closures as part of the government’s supply-side reform in China have almost run their course during the past two years and profits have risen as a result, but CRU believes that priorities will change soon towards focusing more on M&A. To date profitability has been considered something of a deterrent to M&A. However, the recent levels of profitability have been needed to repair balance sheets of many steel companies by paying down debt which is a necessary pre-cursor for mergers and acquisitions. Hitherto, debt levels have acted as a barrier to M&A but this barrier is being reduced. Moreover, since domestic capacity expansions are effectively banned, mills are left with little choice but to make acquisitions or be acquired. 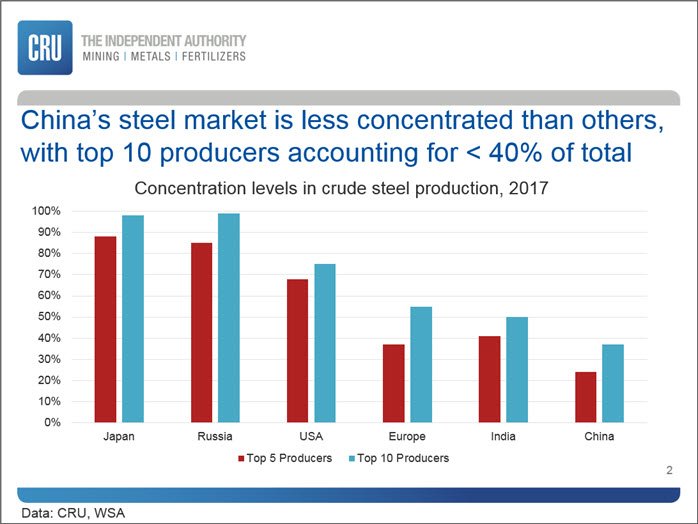 Obstacles to M&A in China are changing
Given that approximately one-half of China’s steel industry (by volume) is state owned one might be forgiven for thinking that this steel industry consolidation would be easy to push through, but previous steel industry experience has shown this is not necessarily the case. In 2005 the National Development and Reform Commission (NDRC), China’s most important economic planning body, published a policy focusing on structural adjustment and consolidation. But this policy failed, largely due to the significant growth in investment that occurred in the steel industry between 2008 and 2013, when approximately 500Mtpy of capacity was added, following the post GFC stimulus package.

In the past, significant obstacles to consolidation appeared at the local and provincial level, where vested interests were unable to cede power, profits and taxation revenues. This was largely because consolidation conflicted with targets to maintain employment, local taxes and local autonomy. So-called “blind” investment led to overcapacity and the massive fragmentation of China’s steel industry. Other obstacles included the actual complexity of different types of ownership, lack of transparency in accounting and the inability of companies to use the capital markets to fund a merger.

However, many of these obstacles have now been reduced. Now the government is reforming this process and it should not be beyond the central government’s power to forge mergers between SOEs and encourage them to take place in the private sector. Indeed, local obstacles are being overcome as vested interests are defeated by President Xi’s more assertive central government policies. Local interests have already conceded over China’s painful closure program and stricter pollution controls and local and provincial government officials are now being judged and rewarded according to different criteria.

Moreover, industry conditions are much different from a decade ago, with “low to no” steel demand growth, the need to reduce high corporate debt levels (SOEs account for about 70% of corporate debt in China), close “zombie” companies and an urgent need to improve productivity and add-value-across the industry. Domestic capacity expansions are effectively banned, although “capacity-swaps” can take place, which should also encourage M&A to take place.

Additionally, the market will also play a bigger part and the private sector may be a significant part of this process. The government is encouraging mixed-ownership with private investors being invited to participate and debt for equity swaps are being permitted. In financial markets accounting standards are also improving, making it more possible for M&A to take place. Therefore, many of these above-mentioned obstacles that prevented M&A previously are being cleared in both the state-owned and private sector.

Consolidation, restructuring and vertical integration occurring in many industries
China’s steel industry is not alone in this move towards industry M&A in China’s vast state-owned sector. There have been large M&As in other sectors over the past few years as SASAC (the State-owned Assets Supervision & Administration Commission, responsible for owning and regulating SOEs) has pushed the consolidation agenda forward for State-owned entities. This trend includes other metals and manufacturing industries too and has involved both horizontal and vertical integration. Coal, for example, is an industry where ultra-large coal mining companies are being encouraged to be formed and the largest coal producer has merged with one of the largest power producers.

As part of this process, SASAC is no longer a passive shareholder and is claiming dividends from SOEs. SASAC is also promoting partial privatization and stock market floatation. Most notably it aims to reduce the number of companies that it supervises by combining these SOEs into larger companies by turning them into “profitable and competitive national champions to compete in global markets”. As a result, since 2015 the number of Centrally-owned SOEs has fallen from 117 to 98, through mergers. 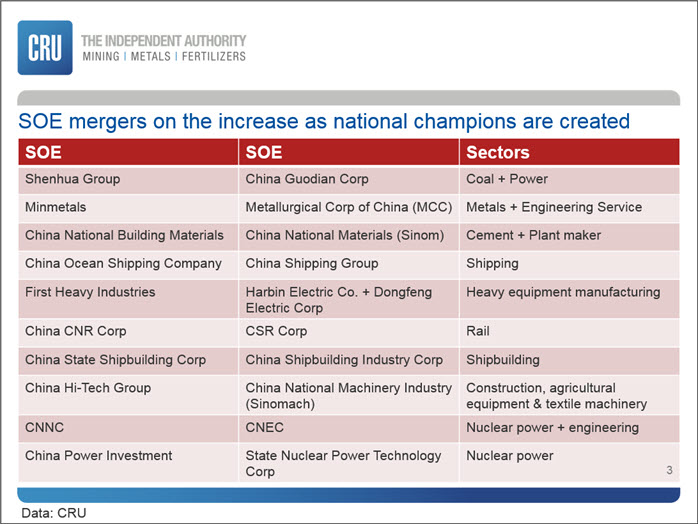 But M&A still need to overcome challenges
This process is easier to complete for centrally owned SOEs - Baosteel and Wuhan Iron & Steel were centrally owned - but centrally owned SOEs only account for about 13% of total steel production. The majority of steel SOEs are under the jurisdiction of regional and municipal government bodies (regional SASACs). Therefore, the biggest political challenge is for Centrally owned SOEs to merge with Provincial SOEs and/or private sector companies.

For how much longer will China’s steel industry remain highly fragmented?
As indicated above, the Chinese government’s metric for measuring the industry concentration ratio is the proportion of total crude steel produced accounted for by the top ten producers. Without higher concentration the government believes that the steel industry will suffer long-term low profitability and the recent increases in profitability may only be a temporary phenomenon. Based on current progress, the 60% level of concentration looks extremely ambitious, although it is lower than existing levels of concentration in many other markets.

Currently, post-BaoWu merger, CRU estimates 2017 concentration levels at just 36%. In order to achieve the 60% target a significant amount of M&A activity will need to take place over the next three years, starting in 2018. Of course, it is entirely possible, that this 60% target may not be achieved as has happened in the past when government policy targets were unfulfilled. However, based on several factors that we have identified above, CRU believes that China is likely to make more significant progress over the next few years. Indeed, some lower profile mergers have already been happening, as shown in the first table of this Insight.

The factors encouraging these mergers are summarized as follows:

As a result, CRU believes that levels of consolidation in the 40-50% range are entirely possible, as we will indicate in the next CRU Insight illustrating what the industry landscape may look like beyond 2020. There may be surprises in store as this comes about, and this is likely to have important implications for the steel industry in China and beyond, which will also be examined in the next CRU Insight on this topic.

CRU Consulting provides advisory services on industry M&A both inside and outside of China as well as examining the impact of such trends on global markets. If you require more information on this practice area please contact us via the button below.