With the global electric vehicle market continuing to grow and new energy vehicle (NEV) sales expected to exceed six million units in 2021, sentiment for one of the key raw materials, lithium, has been increasingly bullish.


To provide some context, lithium carbonate prices have increased by 239% since the start of 2021 (see chart below).

Global lithium reserves are largely concentrated in Australia, Chile, Argentina and China, with some dominated by hard rock deposits such as spodumene and lepidolites, while others have abundant reserves of lithium brines.

Spodumene ore, predominantly from Australia, has a well-established supply chain for refined chemicals such as lithium carbonates and hydroxide to meet the needs of the downstream EV market. In contrast, battery-grade chemical products directly from brines and lepidolites have yet to generate mass commercial utilisation as they have been traditionally processed for industrial applications.

Brines account for approximately 60% of global lithium resources, and over 80% of lithium reserves in China; yet over the years technological obstacles have discouraged research, and refined chemical grades were less favoured than those produced via the spodumene route. But the growth of the EV market has incentivised more research and development into various novel routes of extracting and purifying lithium from brines. Chinese producers are specifically focussed on this, being the major lithium chemical refiner globally, to reduce its dependence on imported spodumene and take advantage of plentiful domestic resources.

The “Lithium Triangle” in South America is famed for its highly concentrated lithium content and low magnesium-lithium ratios (Mg-Li) (<10), with brine deposits including Atacama, Hombre Muerto and Cauchari-Olaroz. In contrast, brines in China are situated on the Tibetan Plateau at high altitude and with high Mg-Li ratios (usually >40), which limits large-scale industrialisation and hinders the efficient exploitation of these large resources. The table below shows some of the well-known brines in South America and China with their distinct Mg/Li ratios indicated.

Currently there are numerous brines in Western China that are actively involved in lithium production – for example, Qarhan Brines, East and West Taijnar Brines, DaQaidam Brine, Yiliping Brine in Qinghai and Zabuye Brine in Tibet. Zabuye Brine has the benefit of the lowest Mg-Li ratio of ~0.02; brines in the Qinghai region have been producing for decades with traditional methods but have faced numerous challenges to expand and improve the quality of outputs. 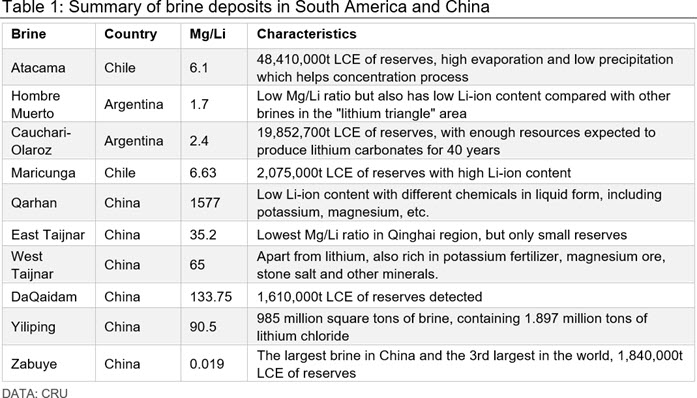 Lepidolite, on the other hand, forms a smaller portion of global lithium resources. In China, lepidolite accounts for less than 10% of lithium resources. Nevertheless, China has Asia’s largest lepidolite mine and is committed to take advantage of this and has aimed for commercial development of lepidolite purification.

Yichun, a city in the province of Jiangxi, is the focal point of China’s lepidolite processing industry, where companies such as Yongxing Material and Jiangte Electric have invested significantly to improve technology in lepidolite refining over the years.

The map of China below shows where major brines and lepidolite resources are located, this highlights some of the difficulties brought by the geographical locations such as high altitudes on the Tibetan Plateau. 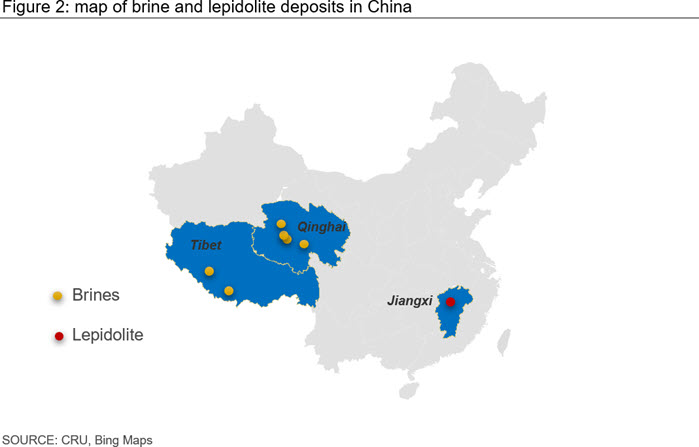 Why has there been a recent technology rush?

Brines and lepidolites have moved into the spotlight recently amid strong downstream demand growth from the EV market, as industry participants seek to supplement the typical spodumene-hydroxide route, increase raw materials supply and counter potential market imbalances in the long-term.

Subsequently the market, particularly in China, has been overwhelmed by newly developed or patented technologies with the aim of extracting lithium from brines and lepidolites more efficiently and overcoming previous difficulties; yet the question remains how effective these methodologies are, and will these be as economically feasible as using spodumenes for battery-grade chemical refining?

In this Insight series, we will compare traditional and emerging technologies used for the processing of brines and lepidolites, discussing potential issues for Chinese chemicals production and exploring whether these emerging technologies could assist with the forecast lithium supply gap.