What does unwinding the Federal Reserve's bloated balance sheet have in store for gold? 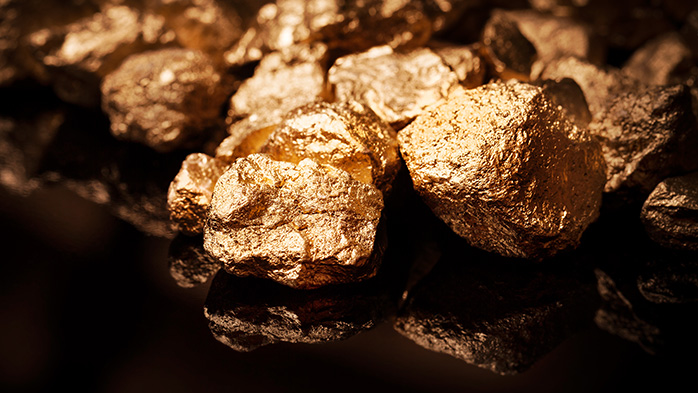 10 years on from the Great Financial Crisis, the US economy is in better shape and the Federal Reserve (Fed) is getting ready to take another step towards normalising monetary policy by reducing its bloated balance sheet, which will have implications for the gold market.


In the short term, there is potential for an equity and bond market correction as the Fed’s balance sheet normalises—this may be bullish for gold; however, the shrinking balance sheet will diminish the inflationary threat from the excess reserves it has accumulated. In the long term, this vote of confidence in the US economy is likely to impose downward pressure on gold prices.

Bloating the balance sheet
In 2008, the Fed embarked on a massive bond-buying programme in an attempt to stimulate the economy by bringing down long-term interest rates which had spiked after the US economy fell into recession following the Great Financial Crisis. The three rounds of large scale asset purchases that took place between 2008 and 2014 helped bring the financial stability back, but at a price.  Following this innovative approach, the Fed’s balance sheet underwent a sharp expansion as it went from less than $900 billion in 2006 to approximately $4.5 trillion today. 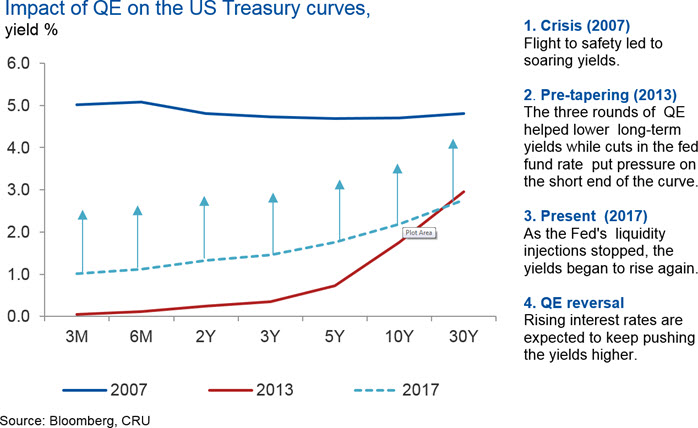 Scale of the task and method
The central bank’s assets now include about $2.5 trillion in Treasuries and $1.8 trillion in mortgage-related securities, with currency and gold accounting for the rest. (Although not a focus of this insight, it is interesting to note that the Fed calculates the value of 8,133.5 tonnes of gold it currently holds on its books at a price of just $42.22/oz. This price has been used as an official US government gold price since 1973 when it was established by international agreement and confirmed by Congress. If it was to use gold’s current market price of $1,325/oz for the purpose, the value of its official gold holdings would have totalled $346.5 billion, or 31 times more than today’s ‘official’ figure of $11 billion). On the liabilities side, the Fed now has a large amount of short-term liabilities, primarily in the form of excess reserves held at the Fed by commercial banks. These were acquired in the process of quantitative easing. 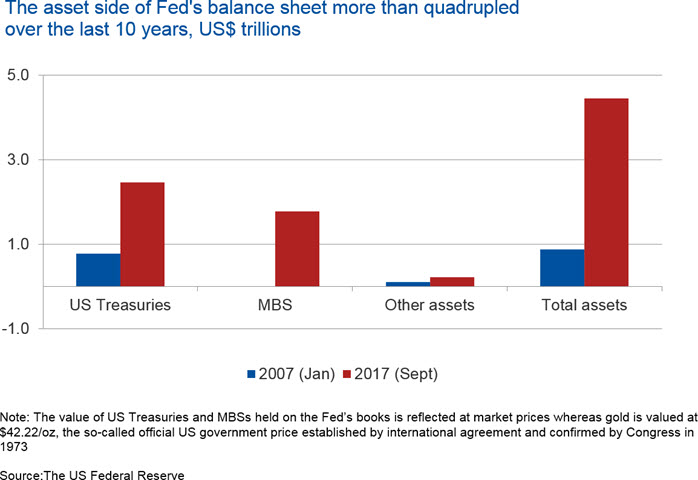 Now, that the US economy is in a better shape the Fed is expected to begin to reverse the process of quantitative easing by reducing its bloated balance sheet. To avoid a repeat of the 2013 ‘taper tantrum’, it plans to do so in a passive and well advertised manner.
Importantly, the balance sheet will be unwind not by sales of assets that the Fed currently holds but by ceasing the current practice of reinvesting the proceedings from maturing bonds back into US Treasuries or mortgage-backed securities. Under the current plan, the Fed will set caps on how much of the proceeds will be allowed to run off each month and reinvest the rest. The caps will rise in increments starting with $6 billion per month in maturing US Treasuries, and then increasing by $6 billion every quarter until it reaches $30 billion per month. A similar plan was laid out for its agency debt and mortgage backed securities; it will begin with the cap of $4 billion per month until it reaches $20 billion per month. As the Fed begins its balance sheet normalisation in October 2017, we anticipate this programme to reach its peak of a $50 billion a month reduction in July 2019.

The Fed’s ultimate goal
The Fed has left open to interpretation the details about how small a balance sheet it would like to have. In our view, the elimination of the excess reserves could be used as a reasonable goal for such a task. After all, a quickening economic recovery could provide incentives for banks to withdraw funds held as excess reserves at the Fed and inject them into the real economy. Given the significant amount of funds held as excess reserves this increased lending could significantly intensify inflation pressures. We believe that the Fed would try to avoid such an outcome. 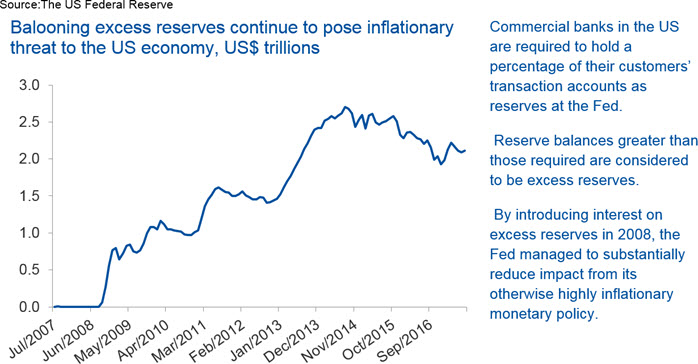 As it starts reducing its balance sheet in October 2017, and based on its projections of a $50 billion a month reduction when the programme is at full speed, we anticipate that excess reserves that currently stand at $2.1 trillion could be reduced to zero, everything else equal, by the end of 2021. That would effectively leave the balance sheet at approximately $2.3 trillion, or just over a half of its current size. 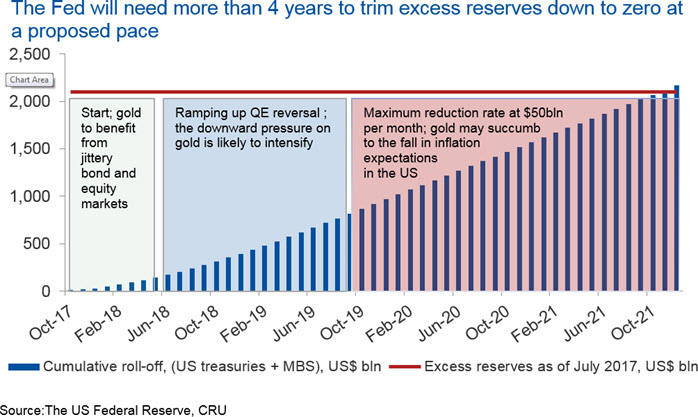 The Fed’s balance sheet and gold
Our analysis of the relationship between the Fed’s balance sheet and gold prices suggests that it is far from being linear. Indeed, gold flourished during the first two rounds of the QE as the unprecedented scale of these liquidity injections had raised concerns about setting off a 1970’s style inflation which in turn gave a boost to the gold price. However, it collapsed shortly after the Fed launched the third round, dubbed the QE-Infinity. Apparently, the boost it gave to the investor confidence coupled with the lack of convincing inflation pressure from the previous liquidity injections were sufficient enough to prompt most investors to abandon their search for anti-inflation hedges and demand for gold collapsed as a result.

If everything goes according to the Fed’s plan, falling excess reserves of commercial banks should help recede the fears of the US economy being driven into hyperinflation. As a result, investors may start liquidating their positions in gold and seek for alternative investments able to offer them a higher level of return. 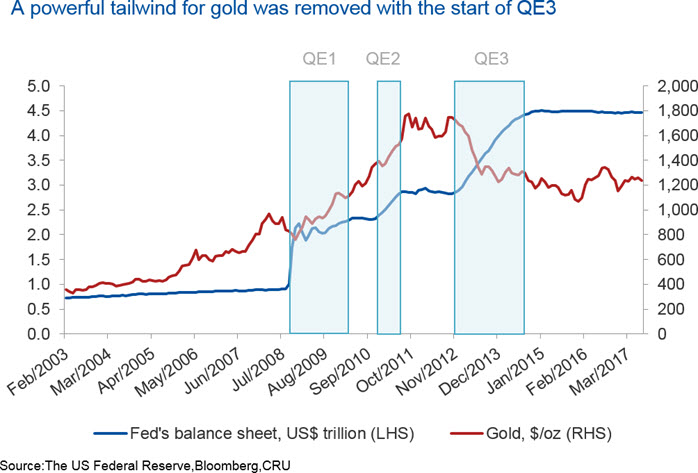 That said, the potential for a financial accident is quite substantial, in our view. After all, the reversal of QE and the prospect of higher rates are damaging for the US bond market, including Treasuries, one of the perceived safe-haven assets and gold’s major competitor in this field. The withdrawal from the market of a large persistent buyer will obviously influence pricing of this asset. As rates rise, coupons on new bonds climb, but the prices of all existing bonds, with the exception of those held to maturity, drop as they have to be readjusted to equal current market yields. Watching the principal value of their bond portfolios falling will be hard for those investors whose investment horizon is shorter than the maturity period of their bonds, so they will be forced to look for other safe-havens, a positive for gold.

An environment of rising bond yields is always a challenge for riskier assets, so equity markets should struggle to continue their strong performance. Once traditional stock and bond markets begin to wobble, gold is likely to become one of the main beneficiaries from this asset rotation, but probably not for long.  Assuming that the US economy remains on a recovery track and global economic conditions normalise over the next few years, as interest rates continue to rise, investors may have fewer reasons to hold gold. As their appetite for riskier and higher-yielding assets improves, demand for gold is anticipated to wane, resulting in softer gold prices.