Global demand for EVs is rapidly outstripping manufacturing capacity, leading to many speculating as to whether Chinese EV OEMs may choose to venture into the export market.

Chinese vehicle brands are not currently marketed or sold in Europe, and cultural barriers and brand loyalty may cause European consumers to be resistant to buying unfamiliar foreign brands. But this is not without historical precedent: although near-ubiquitous now, Japanese vehicles were a rare sight in the west before the launch of the Toyota Corolla took western markets by storm in the 1960s.

China has traditionally been the key driver of global EV sales…

For as long as NEVs have been commercially available, the market has been dominated by China. Over the last 5 years, the country has accounted for more than 40% of global NEV sales on average, driven by very generous subsidy schemes and the availability of a wide range of affordable models. China is steadily scaling back its generous subsidy policy, and national-level subsidies are expected to be removed entirely within the next couple of years. Nonetheless, we expect China to continue to dominate global EV sales, with half of all expected global NEV sales to be in China during the next decade. This will be driven in part by the government policy (such as mandating a minimum quota of NEV sales for automakers), but also by increased consumer demand as NEV prices continue to decline and the availability of high-quality models increases. The Chinese government has announced clear plans to raise NEV sales to 20% of the automotive market by 2025, and 50% by 2035, and as time goes on, these look more and more achievable. 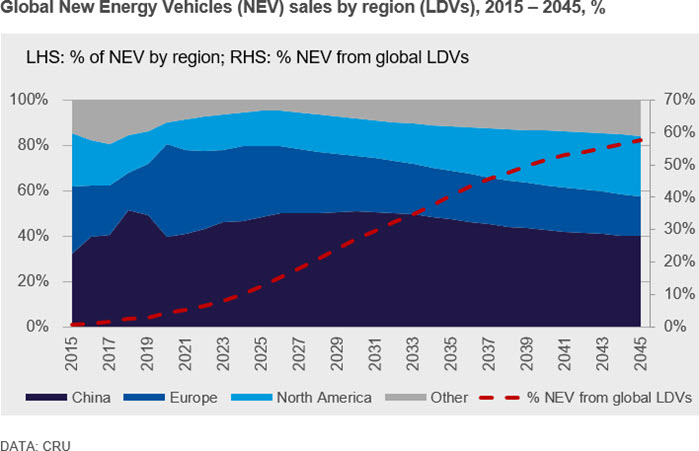 …but the west is catching up quickly

Looking to Europe, European EV sales grew by a staggering 144% year-on-year in 2020. Much of this growth came in the second half of this year, as five of the six biggest EV markets in Europe (France, UK, Germany, Sweden, and Netherlands) increased their EV subsidies following the “green recovery” directive espoused by policymakers across the globe in response to the COVID crisis. Although early evidence suggests that this growth may have slowed down slightly in Q1 2021, we nonetheless expect NEV sales growth to remain strong in the mid-term. 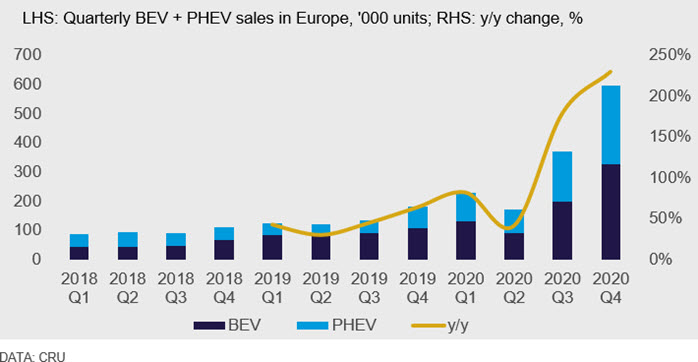 Although European NEV manufacturing capacity continues to expand, it remains outpaced by demand. Waiting lists for EVs continue to be exceedingly long as consumers rush to benefit from higher availability of better-quality models and higher subsidies.

Could Chinese OEMs begin exporting EVs to the west?

Given the head-start that China has on EV manufacturing scale over the west – and given that European subsidies are increasing at a time when Chinese subsidies continue to decline – there are some in the market who are questioning whether Chinese EV manufacturers may begin to target export markets in the coming years. This would not be an easy transition: right now, there is not a single widely accepted Chinese car brand marketed and sold in Europe or the USA, and even in China, western automotive sales are higher than Chinese brands. 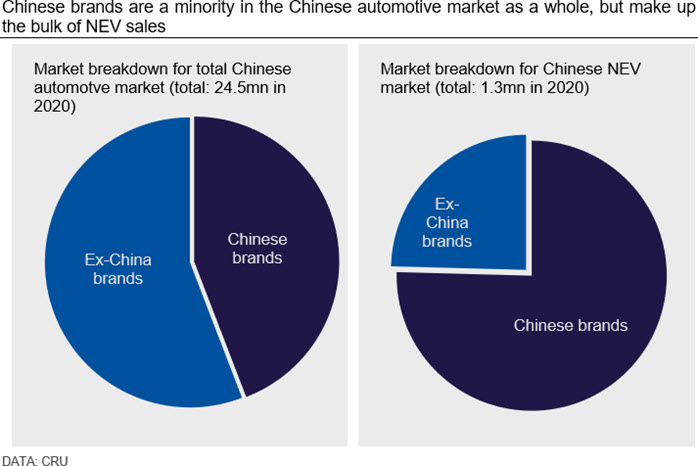 But if Chinese EVs were price-competitive, widely available and marketed appropriately, we believe that there is no reason why they could not be successful globally in the coming decade. And there is certainly a historical precedent for this from other countries. Although now a powerhouse of the global automotive industry, Japanese cars were extremely rare outside of Japan until the late-1960s, but this changed rapidly after the launch of the Toyota Corolla took the market by storm (later becoming the best-selling car of all time). This happened again to a lesser extent with Korea in the 1990s, where a weak domestic automotive market forced Korean firms like Hyundai and Daewoo to begin aggressively entering international markets with famous models like the Elantra.

Manufacturing EVs in China and selling in the west has already been proven to be a viable business model, with two companies in particular – Tesla and Dacia – manufacturing cheap low-range EVs in China and marketing them overseas. Should one or more Chinese EV manufacturers be successful in scaling up production of affordable NEVs that are accepted by the European market, then this could have a hugely transformative effect on the global NEV landscape.

The development of a Chinese EV export industry is by no means a certainty, and there are many risks and threats associated with this thesis. There is no guarantee that consumers in the west will accept Chinese EVs, and there are also geopolitical ramifications which must be considered. Given the importance of the automotive sector to many western economies, there is a possibility that policymakers might change tariff laws on vehicle imports to protect domestic production.

Nonetheless, if Chinese EV manufacturers are successful in marketing their products overseas, this would have tremendous implications for commodity demand. As NEVs become a larger fraction of global automotive sales, this would accelerate the demand shift of key automotive materials like steel, aluminium, and copper from Europe to Asia. Moreover, Chinese EVs are far more likely to use cheaper, lower-range LFP battery chemistries than their western counterparts. An increase in sales from Chinese NEV manufacturers worldwide would have strong implications for long-term nickel and cobalt demand.

However, it should be remembered that EV leadership is not only a matter of production capacity, low prices, or vehicle quality. When reaching new markets, cultural barriers and brand loyalty play a decisive role for buyers to shift from one brand to another one, which is a significant challenge that Chinese manufacturers will face in Europe and North America.