EU ETS compensation rules are changing – how will you be affected? 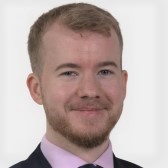 With its unparalleled data and market insights, CRU is well-placed to advise on the implications of future changes to the ETS – including new indirect compensation rules for higher power costs – for your business strategy and operations.

Metals and fertiliser producers are heavily impacted by EU ETS regulations
The EU ETS scheme is fundamentally altering the economics of metals and fertiliser production in Europe. These industries are highly energy intensive, commonly accounting for 30-70% of total production costs. Higher carbon prices are therefore likely to increase production costs for a broad span of European industrials including steel, copper, nitrogen and aluminium producers (see here for a more in-depth discussion).

More stringent compensation rules for producers are compounded by the effects of higher carbon prices. As regulators lay the groundwork for the next phase of the EU ETS post 2020, CRU believes prices for CO2 allowances will increase over the medium and longer term. This comes off the back of a 3-4 fold increase in the recent period (see here for details). Against a backdrop of higher prices, producers are subject to progressively less generous compensation rules.

Focus is shifting to rules governing power costs
Power generators have been disproportionately impacted by EU ETS reforms. Concerns around potentially adverse impacts on industrial competitiveness have meant that Europe’s producers have historically been compensated for higher direct energy costs through the free transfer of emissions allocations. However, these rules have come to an end for power producers: any facility with a capacity of greater than 20MW now receives no free allowances, meaning the power sector is fully exposed to any carbon-related costs.

Compensation for downstream power users is treated separately from the ETS directive under state aid rules. Aluminium and copper smelters as well as EAF-based steel producers are among the industries impacted by higher power costs. The EU Commission issues guidelines permitting member states to compensate certain industries for the higher power costs resulting from the EU ETS, linked to the volume of revenues raised from the sale of emissions allowances.

To date, such “indirect compensation” rules have been applied differently across countries. In Finland, for example, in 2017 a total of €37.9M of compensation was granted to 55 plants which consumed approximately 21,500 GWh. By contrast, in Germany, total aid given amounted to €202M in the same year (see below chart). Concerns about the resulting “level playing field” issues have been cited as a spur to regulatory reform in this area. 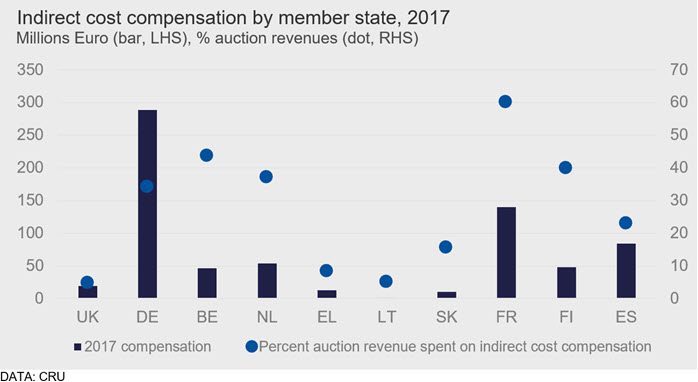 Indirect compensation rules could tighten
Indirect compensation rules have become progressively more stringent, and further changes are afoot. Maximum compensation levels have already fallen from 85% to 75% of total auction revenues between 2015 and 2019. However, in February, the EU issued a consultation document ahead of new guidelines expected to be agreed later in the year. These guidelines will subsequently be interpreted by member states during 2020.

The precise shape of the future rulebook remains unclear but is unlikely to be favourable to producers. DG Comp – the department of the EU Commission responsible for internal market and, therefore, level playing field-related issues – is consulting on key technical rules and parameters including:

This leaves the possibility that sectors such as aluminium and copper could either be ineligible or in receipt of substantially less compensation. Although a range of options remain formally on the table, CRU’s intelligence suggests that key industries are at risk of a substantial reduction in indirect compensation provisioning including, in some cases, a loss of eligibility (the EU has previously proposed <25% of auction revenues be allocated for compensation).

Time to influence policy and adapt commercial strategies
It is critical that EU ETS rules be based on a proper understanding of the industry impacts. Current policy impact assessments, have concluded that the risks to industrial output and investment from EU ETS are limited. However, the impacts are generally weakly observable from top-down and aggregated analysis commonly employed by policy makers to understand these effects. Detailed mill & product data are key to identifying risks. The chart below, for example, highlights the commercial risks to EU aluminium producers, many of which are high cost when seen in the context of a globally-competitive market. 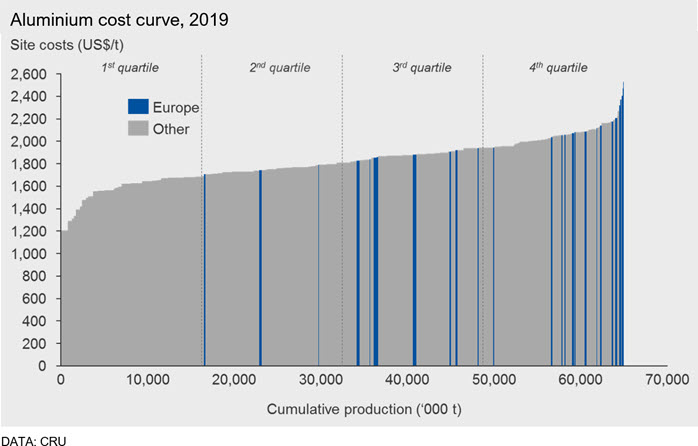 A stronger understanding of the potential industrial impacts of EU ETS-related policy decisions is key. The EU Commission is still drawing up its guidelines and it will also remain for member states to interpret the rules next year. Detailed analysis of the import substitution and wider economic risks which are likely to arise has the potential to shape the design and interpretation of policy rules. Robust, independent data and industry analysis will need to be at the core of these efforts.

Assessing these risks and their commercial implications is a complex but important task. Indirect compensation rules could be critical in shaping the future of the industries that are most exposed to the cost of power. Should these become more stringent, and the cost of carbon continue to rise, then the implications could be strategically highly significant. CRU has a detailed understanding of the historical and future impact of the EU ETS on European industry and is well placed to advise on how changes to the indirect compensation rules will impact your business under different policy rules.