Analysing the impact of electric vehicles infrastructure build out


A global infrastructure revolution is required to support mass diffusion of Electric Vehicles (EVs). The buildout of this infrastructure will drive growth in global copper demand, as it is required both for the construction of electric vehicle charging points, and the development and upgrading of power networks.

However, the scale of these impacts will substantially depend on the type of infrastructure constructed, future battery performance, and the ability and willingness of consumers to depart from the current behavioural norms of liquid fuelling.

Introduction
Car ownership is a defining aspiration of the global middle classes. With retail gasoline networks well developed globally, the current generation of drivers are accustomed to driving with frequent and unrestricted access to refuelling stations. The growing ranks of new and potential battery powered vehicle owners, however, are reliant on a new, comparatively underdeveloped infrastructure system.

As electric vehicles become more common, “range anxiety” – the fear that a vehicle might not have power to reach the next available charging station – is a potentially important issue affecting the success of any transition to electric vehicles. How will vehicle manufacturers, policy makers and others involved in the ongoing transformation of auto value chains overcome such consumer concerns?

Larger, higher performance batteries will be an important part of the solution: the (extended range) Tesla Model 3 already affords over 300 miles of uninterrupted driving, and further battery innovations appear likely in the future. In some cases, plug in hybrids may emerge as the technology of choice. However, battery improvements alone will likely not ensure that consumer demands for convenient and flexible charging are realised.

A global infrastructure revolution will be required to achieve the sales targets that are rapidly being adopted by policy makers and auto manufacturers alike. Nowhere in the world could this be clearer, than in the case of the recent policy announcement in China for the construction of at least 4.8 million charge points by 2020. CRU estimates that the total number of charge points in the country stood at just 815,000 at the end of 2016.

In CRU’s reference scenario, the global number of electric vehicle charge points will reach 176 million by 2035, whilst a ‘high EV diffusion’ scenario is estimated to result in 340 million charge points by the same year.

This build out in electric vehicle charging infrastructure will drive increases in global copper demand, but the scale of the effects also depend upon the type of charging infrastructure developed. If consumers are impatient, have limited access to hook ups at home and work, or if battery technologies disappoint (as they historically have), highly copper intensive “fast chargers” – designed to recharge vehicles in minutes rather than hours – can expect to see soaring demand.

Impact on copper markets
Electricity distribution has long been a key market for copper producers. Forward looking copper producers and investors looking to appraise the potential market impacts of EVs need to consider the potential demand – not just from higher copper loadings in the vehicles themselves – but also the metal needed for EV infrastructure. This will be both for EV charging points, but also to develop and upgrade transformers and distribution networks.

CRU have estimated the extent of this growth, based on a detailed bottom-up assessment of the metal intensities of different charging infrastructures, and the need to reinforce substations and distribution networks to support significant growth in EV stocks. Our analysis suggests that, whilst copper producers will feel the positive effects of increased demand, under baseline assumptions it will take a decade or more to materialize. By 2035, however, CRU estimates that global copper demand in charging and distribution upgrades will reach almost 1.1 million tonnes in the reference scenario.

There are substantial upside risks to this projection. In particular, assumptions regarding mass access to, and preference for, “Tier 1” slow charging facilities – either at home of work – underpin these results. These are both open to challenge. Consumers may be unwilling to accept the inflexibility associated with extended charge times (lasting many hours). Moreover, the physical availability of home or work place charging facilities may be restricted, particularly in high density Asian cities.

These factors may encourage policy makers, utilities and gasoline retailers (or a newly emerging set of competitors) to conclude that substantially more “Tier 3” fast charging facilities are required relative to our baseline assumption. Such a scenario has a material impact on copper demand due to their greater metal loadings, but also – significantly – the additional requirements to upgrade transformers and power distribution networks. Our analysis suggests that, by 2035, global copper demand in a world more dependent on fast charging and distribution upgrades could reach 1.8mn tonnes. 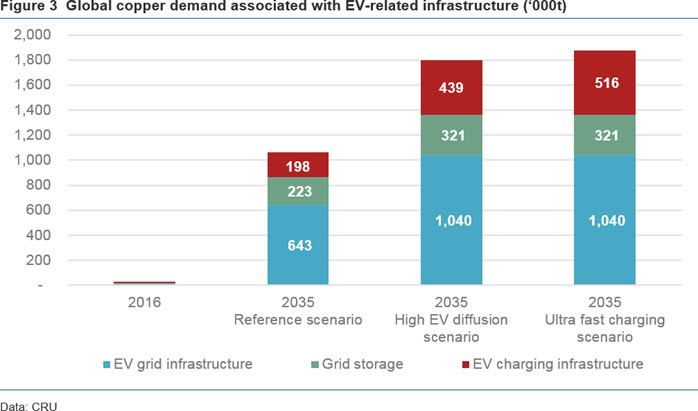 But fast chargers are not all born equal. With current battery technologies, still greater volumes of copper wire and wind may be required to bring charge times closer to those that of liquid fuelling, which the current generation of drivers is accustomed to. In CRU’s ‘ultrafast charging scenario’, in which consumers have access to 350kW public fast charging stations (compared to up to ~200 Kw currently), global copper demand in infrastructure development and upgrades reaches nearly 1.9mn tonnes in 2035.

Conclusion
A global infrastructure revolution will be required to achieve the sales targets that are rapidly being adopted by policy makers and auto manufacturers alike. The build out of this infrastructure will drive growth in global copper demand, as it is required both for the construction of electric vehicle charging points, and the development and upgrading of power networks. However, the scale of these impacts will substantially depend on the type of infrastructure constructed, on future battery performance, and on the ability and willingness of consumers to depart from the current behavioural norms of liquid fuelling.

In a world in which slow charging forms the basis of future EV charging, associated copper demand is boosted modestly in the short term, but rises to nearly 1.1 million tonnes by 2035. However, if consumers are impatient, subject to wider charging access issues, or if battery technologies disappoint, the future network may rely on fast chargers more extensively.

This could result in much more significant copper market impacts. In CRU’s “high EV diffusion” scenario, for example, demand reaches nearly 1.8 million tonnes by 2035, (and reaches 1.9 million tonnes in the “ultra fast charging” scenario). This reflects not only the higher copper loadings of these charging facilities but also the more significant distribution and transformer upgrades that would be required.

See all our analysts