The global markets for aluminum and copper scrap are entering a period of transition. For the past 20 years, China has been a reliable outlet for excess scrap, establishing a stable trade flow between net-producers of scrap and consumers, but encouraging reduced need for scrap processing infrastructure in the generating markets.

Recent Chinese legislation has placed limits and bans on imports of certain scrap types, upending traditional flows. This spotlight explores how flows are changing and how evolving environmental policies will affect scrap markets in future.

Rapidly rising metal demand in China, coupled with limited restrictions or safeguards on scrap quality or specifications, encouraged Chinese importers to acquire whatever grades of post-consumer and industrial scrap they could – giving rise to China as the prime example of a net scrap consuming market. Furthermore, with wide disparities between processing costs in China and more-developed markets (e.g. North America, Western Europe, Japan and South Korea), the scrapyards and traders in those latter markets were happy to procure and sell scrap to China at highly favorable pricing and shipment terms that they could not arrange with domestic buyers.

This arrangement benefited both scrap exporters in net producing markets and scrap importers in net consuming markets, especially at a time when refined copper prices were skyrocketing due to the limited availability of copper concentrates and regional smelting capacity needed to support China’s rapid growth. As a result, an entire global trading industry and business model was formed to transport various grades of nonferrous metal waste from net-producing markets, where domestic players were either unable or unwilling to process the scrap into reusable forms, to net-consuming markets like China, where the regional stakeholders had the infrastructure, technical abilities and commercial willingness to import and consume the world’s excess metal scrap.

However, traditional flows have been upended with recent Chinese state action to limit or ban certain imports of metallic scrap. These developments have opened doors for the potential rise of processing markets in the scrap trade, where neither large volumes of metallic scrap are produced or consumed, but rather waste scrap is imported to be processed, sorted and in some cases even smelted or refined into marketable copper and aluminum products prior to re-export into consuming markets. The regulatory framework underlying these developments is changing rapidly, and the ultimate responses from key stakeholders across both net producers and net consumers of scrap will vary widely depending on future developments.

In July 2017, the government of China announced further restrictions on the import of certain recovered materials known as Category 7 scrap, currently expected to be implemented from January 2019. Included in these materials are numerous variations of non-ferrous metal scrap bearing copper and aluminum.

These moves were far from surprising as the Chinese authorities have spent the last five years tightening control of scrap imports. In particular, the February 2013 enactment of the so called “Green Fence” of scrap import inspections, along with numerous ad hoc customs efforts since 2015, have aimed to root out smuggling and circumvention of new regulations, by exporters and importers alike. These efforts culminated in 2017 with formal Category 7 scrap ban announcement. Through 2017, authorities in China also cranked up the pressure on industries known to cause water and air pollution with efforts to reduce short-term sources through industrial closures of steelmaking and aluminum production facilities during the winter heating season and taking longer term measures through inhibiting known polluting industries through unannounced onsite inspections for safety and pollution controls and revocation of import or processing licenses for companies who failed to meet the increasingly stringent inspection requirements.

The trade restriction in question specifically targets certain nonferrous scrap grades categories under the harmonized system (HS) codes 7404 and 7602. Relevant categories within each HS heading are noted in further detail in the table below. Category 7 materials tend to have lower metallic content shares, making the waste from processing these scrap items greater than for category 6 imports.

State of scrap flows pre-ban
China has long been the largest consumer of waste copper and aluminum, making changes here significant for scrap markets. From 2012 to 2017, China represented a falling share of copper and aluminum scrap imports, with aluminum scrap falling from 34% in 2012 to 22% of 2017 global aluminum scrap imports. Copper scrap imports, on average 56% of the global market, fell from 60% of global imports in 2012 to 52% in 2017. The next largest share in either import category is the 11% share of global aluminum scrap which flowed into India in 2017. Thus, there is no other market which can accept the volumes consumed in China when China moves forward with these restrictions.

While China remained the largest import market for these tradeable products, import volumes for both aluminum and copper scrap had already begun to decline during the past five years because of several factors. Firstly, the requirement for secondary feedstocks like scrap began to fall as China’s smelting and refining capabilities grew. Secondly, aluminum and copper scrap imports fell from 2010 and 2012 peaks as Chinese policies began to take effect in limiting waste imports. To some extent, both copper and aluminum scrap tonnages reversed the series of declines in tonnage from peaks at the beginning of the decade in 2017 as the impending ban incentivized importers in China to rush as much material as possible into the country before the bans. 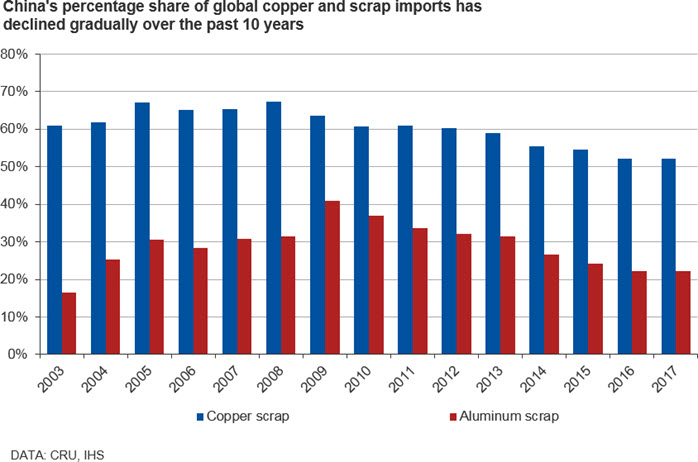 Thirdly, rising wages gradually made the Chinese market an increasingly unattractive export market. For example, zorba exporters serving the Chinese market would often sell at a certain discount to the current LME aluminum price and earn their margin from the narrow spread between zorba export prices and LME aluminum prices.  However, these discounts became wider as wages rose and commercial processing costs subsequently increased in China. The figure below shows the differential between average US labor costs and Chinese labor costs.  While there has been some degree of wage stagnation in both the US and European markets, Chinese labor rates have continued to rise strongly over the past 15 years, effectively reducing the margin that scrap traders could receive from scrap shipments priced on the basis of a discount to the LME. 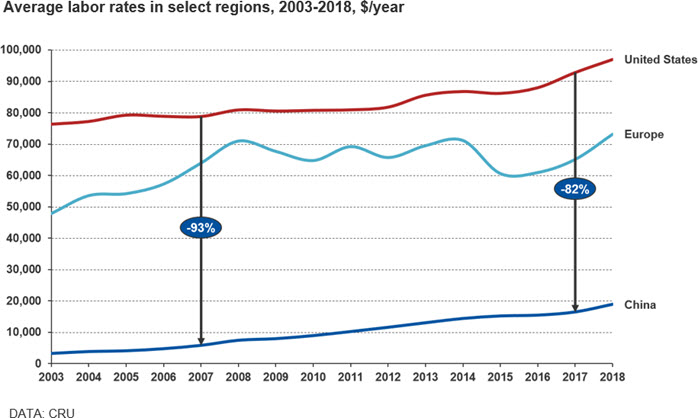 Changes to flows since the announcement
With the ban on Category 7 and restrictions on contaminant levels for Category 6 grades, overall export volume destined to China is expected to continue falling sharply over the next 2-3 years, with significant declines expected during the second half of 2018 and first-half 2019. Some of this material will likely be shifted to other adjacent markets in Southeast Asia, particularly in areas where new secondary smelters are ramping up or Chinese scrapyards are building scrap processing plants for subsequent re-import into China. Following the Category 7 announcement, China has affected numerous other policies and declarations that have further cemented China’s position on solid waste and scrap policy. In early May 2018, China announced a 30-day ban on all pre-shipment inspections for US-origin scrap shipments, which effectively halted certain China-bound scrap shipments originating from the West Coast and New York/New Jersey through the first week of June. These developments are already evident in the most recent trade figures for the US, which show that both exports of aluminum and copper scrap to China have more than halved in May, but in both cases were partly offset by skyrocketing export shipments to trading partners in Southeast Asia (ASEAN) and India.

Similarly, as Chinese imports fell, imports into nearby markets have increased substantially. Specifically, nations where industrial consumption of scrap copper and aluminum was historical low experienced marked increased in import tonnage. These regions include Malaysia, Taiwan, Turkey, Thailand, and Indonesia. This increase in scrap imports can either be consumed domestically, processed for re-export in forms pure enough to meet the new waste standards, or, as has been the case in more recent months, will be stockpiled in warehousing facilities alongside ports in anticipation of future demand within the region. Currently, the last of these options appears more likely as some traders and buyers of scrap have been taking a ‘wait and see’ approach before making serious investments in Asian ex. China processing facilities.

Outlook for market categories
As the Chinese trade restrictions continue to come into effect during the coming months and new trade patterns are established, CRU views the following developments as likely responses or consequences of this structural change in the market.

At CRU we make it our business to assess and identify exposures and opportunities arising from cyclical and structural changes in the market like the Chinese scrap ban.  During the past 9 months, we followed these markets closely and have continued to develop our understanding of global trade flows for both aluminum and copper scrap, as well as the underlying key drivers of regional scrap supply and demand from net-producing regions.  Through our global and dedicated analyst teams and consultants, we provide support in the form of regular market analysis and tailored consulting services, in financial due diligence, growth and procurement strategy. For a deeper discussion on how CRU can help you, contact one of our authors, regional leaders or CRU partners.