In the second edition of this annual Insight (view part one here), CRU takes a step back and review the key changes and developments in the optical fibre and cable industry in 2019, highlighting the lows and highs, alongside key moments and advances in technology.

Furthermore, we shine a spotlight on the key market moving topics and upcoming research areas CRU’s Wire and Cable Team will be focusing on in 2020.

Global growth dragged down by China in 2019
Whilst there were a few highlights in 2019, namely the launch of commercial 5G services in nearly 30 countries, it was perhaps a year to forget for many industry participants. CRU estimate global optical cable consumption on a fibre-km basis contracted by almost 7% y/y in 2019, marking the second weakest year in CRU’s records. In terms of market value, we estimate this fell more in the region of 24% y/y. 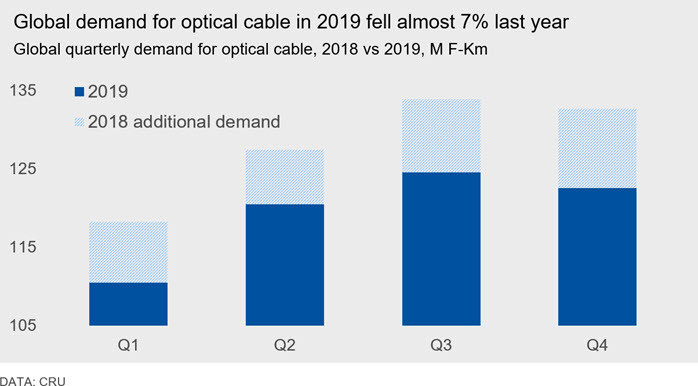 Whilst the level of the contraction last year pales in comparison to the -36% y/y posted in 2002, it proved to be a very tough year for producers across virtually all key markets. It was a year dominated by weak demand, excess capacity and rising inventory. It is however, the collapse in global bare fibre prices which has perhaps hurt producers the most. Let’s take a look at some of the driving forces behind this weakness and other key moments in the industry last year.

Outlook for 2020 still hinges on 5G deployment as the dominant driver of demand
As 2020 progresses, there will be more information about the amount of fibre installed in 5G infrastructure and other new local applications, especially as China ramps up 5G network construction in wide-scale rollouts. This should provide greater insight into the strength of the next generation of fibre deployment, “beyond FTTx”. Whilst it looks increasingly likely 2020 could be another lacklustre year, commercial 5G rollouts elsewhere and rising fibre counts should help provide an uptick in demand moving forwards. With this in mind, let’s take a look at some of the key market drivers for the upcoming year. 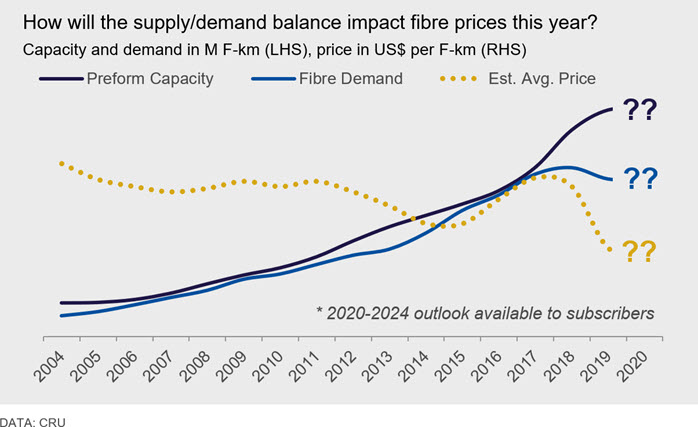 Examples of key topics we’ll be watching closely in 2020

CRU will be tracking developments in these key areas closely over the coming year, providing in depth commentary and analysis across both the Optical Fibre and Cable Monitor and the Telecom Cables Market Outlook. If you have any questions about CRU’s Fibre Optic Portfolio, or indeed would like to see the numbers behind the statements and charts above, contact us via the button below.